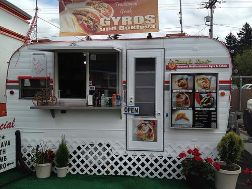 After graduating from the California School of Culinary Arts' Cordon Bleu, Aaron Barnett did an externship in his native Canada at Lumière in Vancouver, BC and was immediately taken with the flavors and produce available in the Pacific Northwest. He moved back to California to work under Gary Danko in San Francisco, shortly thereafter taking a sous chef position at Myth under Sean O'Brien. After working in Portland kitchens for a couple of years, an introduction to restaurateur Kurt Huffman of ChefStable led to the two teaming up in 2010 to open St. Jack. Barnett still tries to find the flavors of Canada no matter what part of the world they originated from, including gyros, his favorite "fast food" from childhood. Where does he get them? NE food cart Ramy's Lamb Shack.

In Canada, gyros are everywhere. I grew up eating everything from the street vendor varieties to to higher end versions. They were the 'fast food' of my childhood. Ramy's Lamb Shack is a little food cart in my neighborhood on NE Sandy, specializing in falafel, kababs, and of course gyros. While the lamb gyro is amazing enough to remind me of my youth, it's the Kafta gyro that keeps me coming back. Kafta is a heavily spiced lamb "sausage" patty, grilled and served with fresh veggies, a tzatziki-type sauce, some kind of relish all wrapped up in a perfect flat bread. I would eat a live sheep if it had all of these things on it. All of the meats, by the way are ultra fresh. It's within walking distance from my house, so on weekends, I like to stop by with my one-year-old son and grab a Super Kafta which we share, while he laughs gleefully at the little Shaun the Sheep style mural painted all over the cart! Still lacking manners, he asks for more by smashing the table with his little lamb covered fists. I love it. It's great to be able to share this piece of my childhood with him.