Share All sharing options for: Pix/Bar Vivant's Cheryl Wakerhauser on Stressful Moves and Straddling the Pyrenees 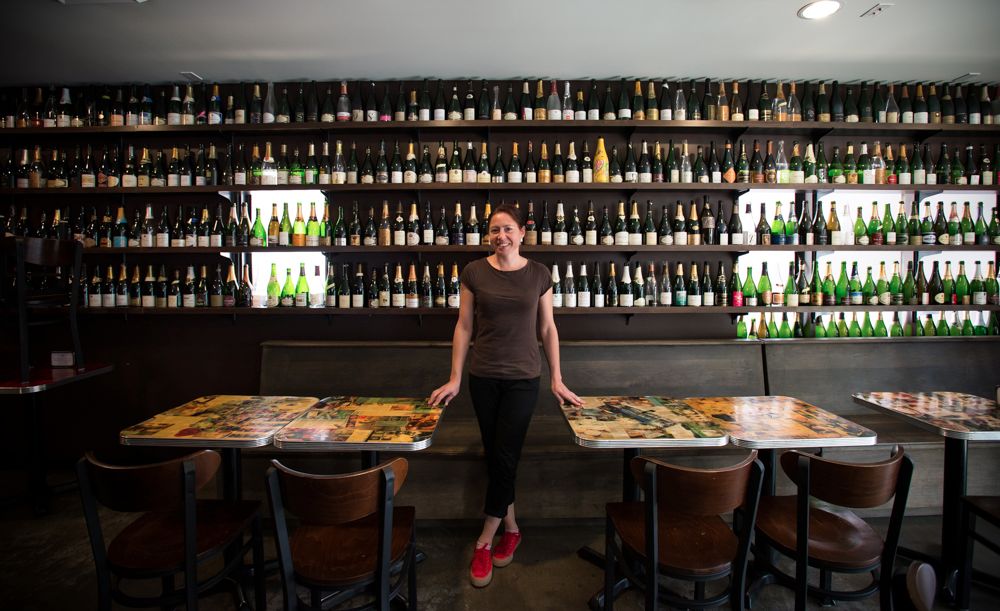 Late last August, on the heels of Pix Patisserie's 10-year anniversary, owner and executive chef Cheryl Wakerhauser surprised many a macaron and champagne-loving Portlander when she consolidated her popular North Williams Avenue and Division Street cafes into a 3,000-square foot former Christian daycare, sharing the 2200 block of East Burnside with Heart Roasters and the late June. She planted a few vines out front, built a pétanque court, lined the walls with empty champagne bottles, put a bull on it, and debuted her new concept — a space that's half Pix, half Bar Vivant, a San Sebastián-style tapas bar where porrons are the reigning vessel and throwing your napkin on the floor isn't rude, it's expected. Having just celebrated this delicious duo's first anniversary, Wakerhauser reflects on the nerves-fraying logistics of moving two restaurants in one day, the virtues of standing while you eat, mythical pétanque-playing frat boys, the financial rewards of being crazy, and where to find the Pyrenees in PDX.

From the looks of things, the two separate Pix patisseries were quite successful when you decided to consolidate, what made you close both and start over from scratch in a completely new location?
I knew this question was coming, because I know a lot of people were thinking, what is she doing, is she crazy? Because what are the two hottest neighborhoods right now? Division and North Williams. Both of those neighborhoods, when I first moved in, I was the first one there, it was kind of quiet, rent was a decent price, I knew my place was destination place and people would drive to it, but now both neighborhoods are changing. So why did I move? Number one, I needed a change. I didn't feel like running two places was what I wanted to do. You can't be in two places at once. And I wanted to be back in the kitchen. So I wanted one location. And also, I bought the building and that's a no brainer. I mean, Williams and Division rents are going to go up and up and up. And my mortgage is going to go down and down and down. This building was $425,000 with a double lot and I got less than four-percent interest, so if people still think I'm crazy, I think they're crazy. It's great. And this will probably be the next up-and-coming neighborhood in five years.

How did the move go?
That day was not fun. I was paying rent (on both spaces), and I knew there would be a period when we were closed here, so to get the most out of the rent and get as much revenue coming in before we closed, we waited until the day before the last day of our lease to move. Of course we had to have a big party the night before, so we did, and then the next day we started moving at 5a.m. We couldn't pack anything beforehand because we were still open, and it was crazy, I mean, think about moving an apartment, you can't do that in a day — pack, move everything, clean, but we did it all. We had pretty much all the staff on site helping throughout the day. Then we were behind schedule here because of permitting delays, and the place wasn't painted so we couldn't put things away, so the courtyard was full of stuff, it looked like a junkyard. Slowly, we moved in, we'd say, "Okay this room is ready, let's go dig through the stuff, let's try to find the chairs."

The new space has two very distinct identities, how are people using it? Are they sticking to one side, or swinging both ways?
When I designed this space, I wanted to keep the two as separate identities, but not have two separate rooms, so that's why I came up with this oval bar, and the section in between I like to call the Pyrenees, so you can have champagne in France, or walk over to Spain and have Spanish tapas. How people use it depends. If you want to order tapas, you have to order them at the bar. So we have some people that want to sit over here [in France], then they go over [to Spain] and order some tapas at the bar, then come back over here and we bring them over to them. But other people, they hang out over in the tapas bar and eat standing up and throw their napkins on the floor. Most people don't, but there's a handful who have been to San Sebastián and they get what we're doing, and they are really excited about it. 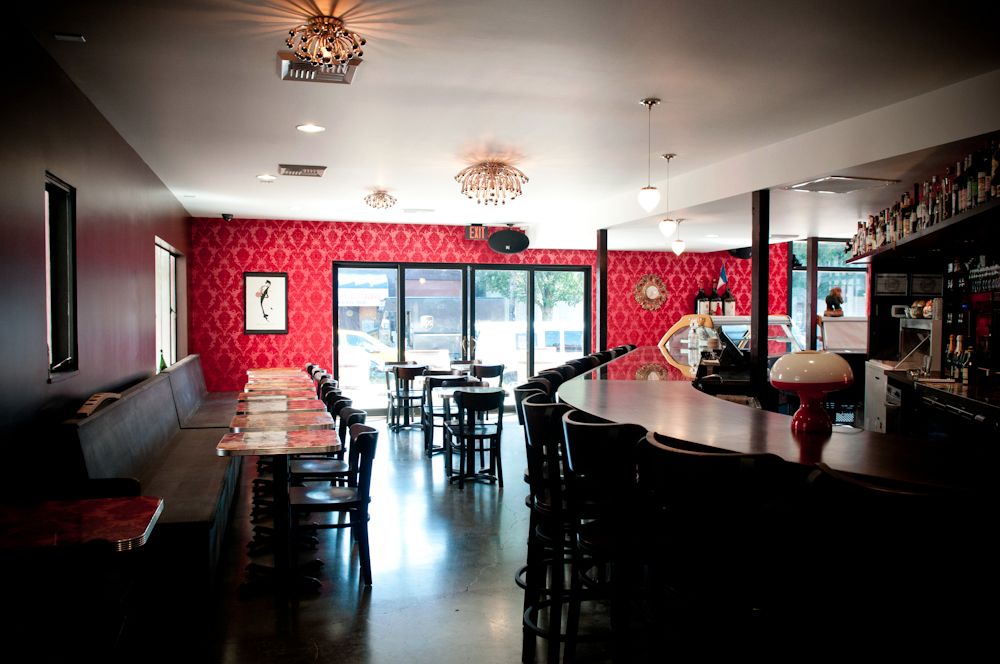 How did the transition into the new split-personality concept go?
In the beginning it was very difficult. First, our city permits were delayed, so we had a whole three weeks where we were closed. And that was really hard on everybody because there weren't hours for the employees, and I was still training them so I was still paying out money. Finally, when we did open, it was a learning curve for everybody — for our staff and for the customers. I modeled Bar Vivant as a Spanish tapas bar from San Sebastián, and most people in Portland, when they think of Spanish tapas, they think of a restaurant that serves small plates, and that's not what it was. So we've had to adapt, communicate to the customers what we're trying to convey, and compromise. For example, in the beginning there were no seats, because when you walk into a tapas bar, you're supposed to go up to the bar, order at the bar, get your food, eat it, you're not there to sit down for an hour. But customers were standing there and saying, where are the seats? So I was like, "Okay, we'll have six seats, and the bar you can still stand at." We kept changing things to meet in the middle. Right now I think we have a good system, but in the beginning it was a little rough.

How did the menu change?
It didn't change too much. At the last two locations, over the course of the last year we were open, our wine list really increased, especially our champagne and sparkling wines section, which went from 150 bottles to over 250, but we never really sold that much wine, and one of the reasons was that we didn't have a savory menu. Wine is made to go with food, so my thinking when I opened this place was that we had to have savory food but I didn't want to have a full-on restaurant. So, since I love San Sebastián, I decided to put in the tapas bar. The idea, like in Spain, is that this is all drinking food — a lot of seafood, salty fried things, all made to be drinking with, and everything is a dollar to $5, so you can eat as much as you like but without having the whole serious formal restaurant. Now I'm selling more wine than I've ever sold before, and we made it into Wine Spectator, this year we jumped to the 2nd category [Best of Award of Excellence], which I took as a compliment.

How was the reception from the neighborhood?
Well, in the beginning, when I was trying to get the liquor license, the neighborhood association did not like me so much. They assumed I was going to be like another bar in the neighborhood that had caused lots of noise and problems. I went to every house on the block and said, "Look, here is what I plan to do, if you haven't been to a Pix already, they're still open and you can come see what we're doing, we don't create an obnoxious environment. This is a respectful place, you can bring your kids, you can come to movie nights, you can play pétanque, it's a family atmosphere." And the response I got was, "Oh movie night, that sounds loud, oh pétanque, what happens when those drunk frat boys come and start cheering on their pétanque buddies?" And I was like, "Okay, I never knew frat boys played pétanque!" I tried to convey that we weren't going to cause any problems, and we even built a $10,000 brick wall in the back to be a noise barrier. Now that we've opened, people can see this is a great place, but in the beginning, it was frustrating, because I've been running this business for 10 years and we haven't had any complaints. And when all you're trying to do is bring something special to the neighborhood, to have people literally point fingers at you and say you're going to destroy the neighborhood, that was hard.

How did your regulars adapt to the new location? Did they come find you?
I believe we've retained most of our regulars. Some of them had a hard time finding us, but once they did, most have come back. It was like when we opened the second location eight years ago — we had people who were like, "I love the new location, it's so much more spacious and nice-looking, and the other one was so crowded," and the other half were like, "The new location is so fancy and big, we liked the cozy petite Pix." But I think with the tapas and the wine here we've adapted and gained a new following too; people who used to say "I don't eat dessert" can eat here.

Does it feel like it's been a year?
I'd say yes, it feels like it's been a year, because I can see a lot of obstacles we've overcome and I can see a difference in how the place runs. And I'm getting a day off! I'm able to run again. After a year, I was hoping that would be the case, because in the beginning I wasn't sleeping, I was't running, I didn't take a day off for months. At the old space, I could take off to Nice for a month if I wanted to, but I wanted this place to be up and running the way I wanted it to, and the first year is very crucial, so I try and spend as much time here as I can. It's a lot of work: I'm the wine program director, the bookkeeper, the executive chef, the creative director. I have my hands in everything and I like it that way, so I can make sure things are done the way that I like, but it's a lot of work.

Do you think you'll ever open a Pix in France and/or Spain? Maybe right on the border, half and half?
Nope. I don't know if you know about the labor laws in France, but... no. Enough said.
· All Previous Bar Vivant Coverage [Eater PDX]
· All Previous One Year Ins [Eater PDX]