Share All sharing options for: Riffle's Jennifer Quist Likes Getting Served at Cassidy's 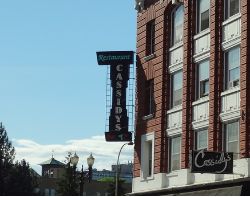 Jennifer Quist is the self-described "hospitality obsessed" owner of Riffle NW, the catch-inspired seafood restaurant smack dab in the middle of the Pearl District. Prior to the Pearl, Jennifer developed her culinary skills as a private Bay Area caterer, then honed her skills in NYC at Jean-Georges' Mercer Kitchen as well as at the Good Knife catering company before making the move to Saks Fifth Avenue. While there, Jennifer was responsible for some 3,000 catering events per year while also developing the in-house breakfast pastry and baking program. Now she throws out her line at Riffle NW, and after a long day, grabs a late-night nibble at a West End favorite for those in and out of the service industry: Cassidy's.

During holiday breaks in college, I would come to Portland to visit family and friends and our meeting spot was always at the PDX institution, Cassidy's. Little did I know that years later it would be right up the street from Riffle, have a late night happy hour and the kindest staff around. It's always a toss up of whether I will order the flatbread that changes regularly (right now: fennel sausage, peppers, arugula, cojita), or what I regularly call the best burger and fries in town. I just love that after a long night of service, it is the most reliable spot — and if I'm lucky, I will run into other great industry friends as well.