Share All sharing options for: Accanto's Dulce Frommer Hikes Out to Otis Cafe 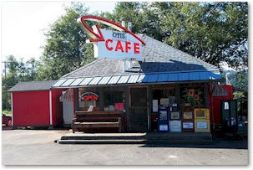 Dulce Frommer is the chef de cuisine at Southeast Portland's bustling Accanto restaurant, the sister restaurant to landmark Genoa. Frommer grew up in Central Oregon, getting her start in food as a do-everything assistant for a Bend caterer. Eventually, she worked in Wiednen+Kennedy's Central Oregon kitchen Caldera and then at Portland's Evoe, before started at Accanto in 2010. When she has time, Frommer likes to feast her eyes on something other than Portland, and the Otis Cafe is one of her favorite stop-overs when she's able to get out of the kitchen long enough to enjoy the beautiful state of Oregon. Bonus points for the "grandma"-like cuisine.

The Otis Cafe is this tiny little mom-and-pop diner located in the equally tiny town of Otis three miles outside of Lincoln City. The rest of the town includes a gas station and an old fashioned post office. Everything from the ketchup to the jam and pies is house made. The brown molasses bread and the sourdough bread are worth the trip alone, and the omelet with ham, white cheddar, and 'vegetables' includes cauliflower which to me says someone in the kitchen is going the extra mile. That and the chicken fried steak is what you always imagine it should be, but never end up getting on your plate anywhere else. It's just very well done unpretentious Midwestern country food like my Grandma Hektner still makes. I like to go there before taking on the epic (for me) hike at Cascade Head or before the drive back home, or actually anytime I am at the beach and within half a day's drive.