Share All sharing options for: Hangover Observations from Feast Portland 2013

This past Thursday through Sunday, chefs, food-lovers, purveyors, artisans, and media descended onto Portland for the second-annual Feast Portland festival. There were tasting panels and blowout, all-you-can-eat events highlighting everything from Oregon wines to sandwiches to, inexplicably, water buffalo. There were lectures and late-night events and of course, lines. Here now, some observations from PDX's feastiest weekend: 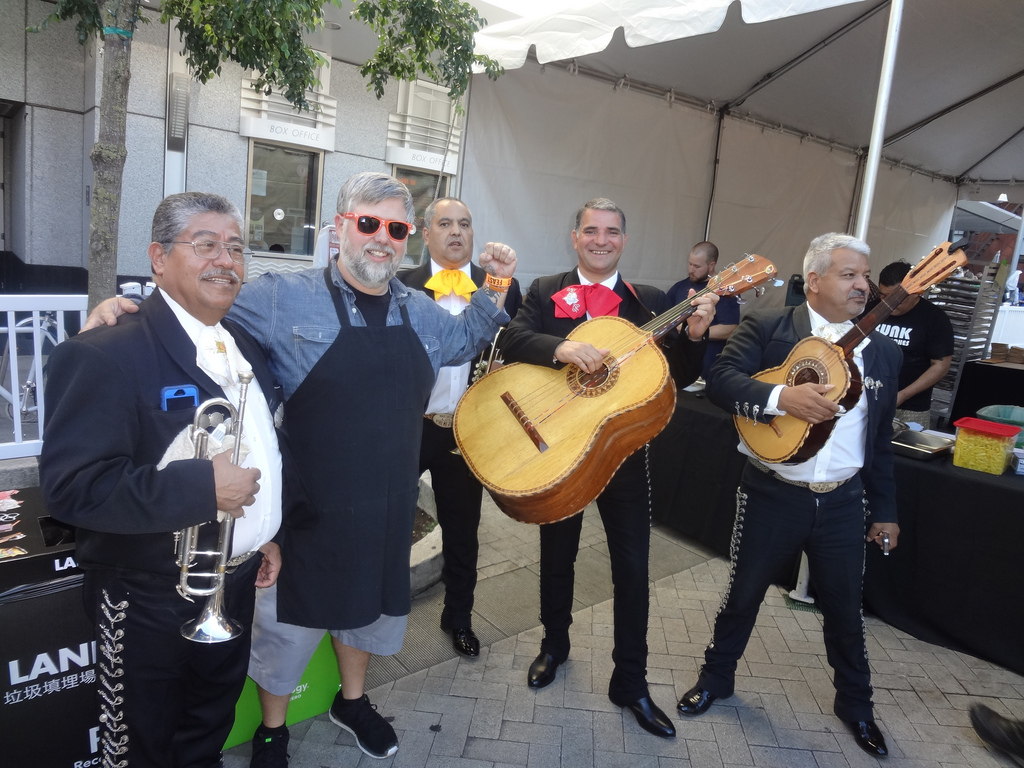 2) Post-Sandwich, industry folk flocked to the Jupiter Hotel for an after-party co-hosted by Eater. Imbibe Magazine rounded up some of the city's top bartenders to shake up cocktails developed by Kelley Swenson: Angel Teta, Brandon Wise, Brandon Josie, Jabriel Donohue, Beckaly Franks, Emily Mistell, Mindy Kucan, and Nick Ramsdell were all on-hand to offer gin-and-tonics or pear shandies. The evening's Style Award goes to Dave Shenaut and Douglas Derrick, who served negronis in matching outfits of bow-ties and suspenders. 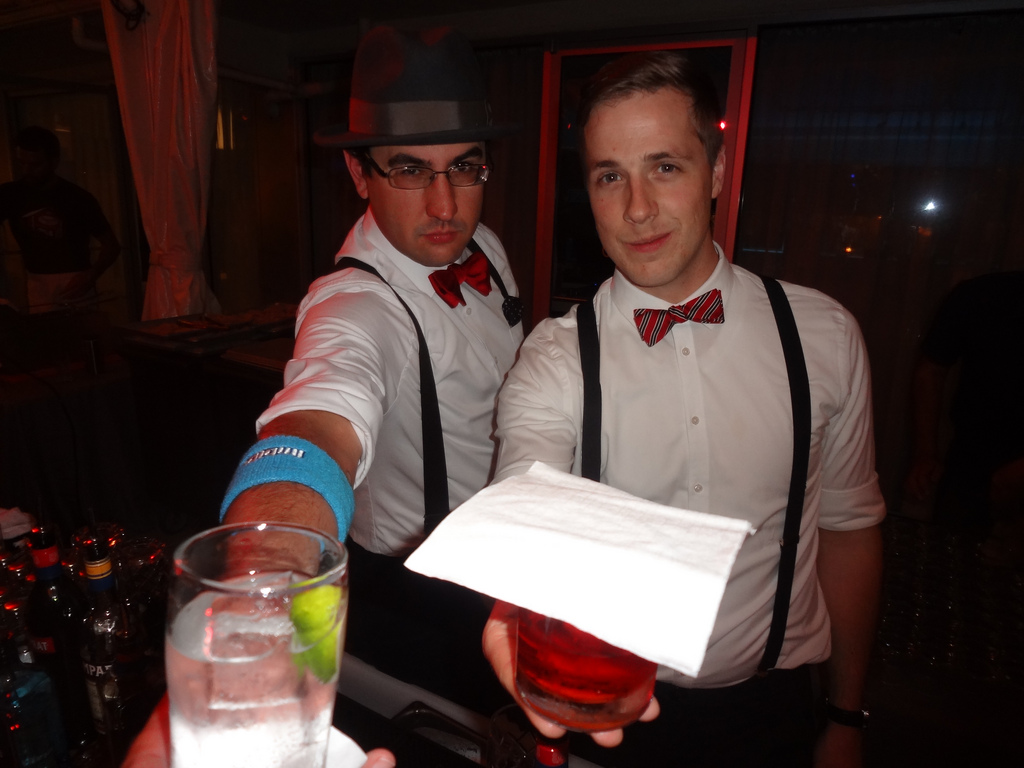 3) The hardest-to-get reservation during Feast was at Ava Gene's. Among the out-of-towners who stopped in: the State Bird Provisions team, Night + Market's Kris Yenbamroong, and of course the Bon Appetit staff (whose restaurant editor Andrew Knowlton named AG one of the year's Best New Restaurants).

5) Chef Chris Cosentino, who served a beef tongue tartare at the Night Market, had to make a health-inspector-mandated announcement at his booth: 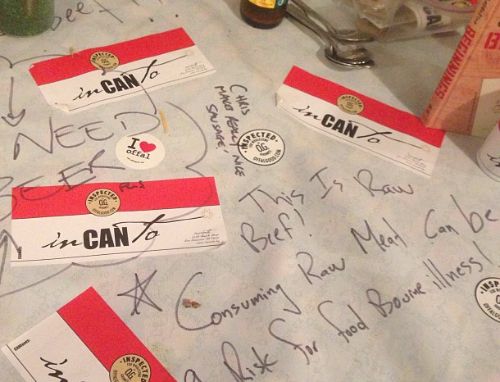 6) Friday evening saw two industry afterparties with decidedly different themes: A Portland Monthly event at Irving Street Kitchen offered a spread of lamb and caviar, while a late-night event thrown by ChefStable went the "wasn't college the best?" route, with Brass Monkeys, keg cocktails, and a flip-cup tournament that saw the Racion crew emerge victorious. Also on-hand at the latter: Eater Young Gun Alissa Rozos delivered her take on the Push-Pop (using Champagne, because of course).

7) Just like last year, the gimmick of the weekend was the late-night #ComfortCall provided by Tillamook Cheese: Holders of a Tillamook cell phone could call anytime between 11p.m. and 3a.m. to get a grilled cheese sandwich delivered to their location. According to Tillamook, 75 phone calls were placed throughout the weekend, resulting in orders for 310 sandwiches (utilizing around 150 pounds of cheese). The most popular: "the Triple Threat," which featured three cheeses. Also, this happened:

Thx for a great weekend Portland! Now Back in LA with great memories and a tattoo of a grilled cheese sandwich! @TillamookCheese

8) Speaking of tattoos: Saturday's Oregon Grand Bounty Tasting was interrupted by a few torrential downpours, one of which happened right before chef Chris Cosentino's scheduled demo. During the rain delay, audience members crowded for cover around the stage, and Cosentino worked the crowd by asking how many were native Portlanders — and of those, how many had tattoos. He then distributed temporary tattoos of his OffalGood logo.

9) In proof that people will stand in line for just about anything: One of the longest lines at the Saturday Grand tasting was at the Whole Foods tent, where guests withstood the downpour for their complimentary tote bags. Queues also formed at the Grand Tasting's USA Pears temporary tattoo booth, where Feast-ers could get anthropomorphized fruit and other pear images airbrushed on their limbs. 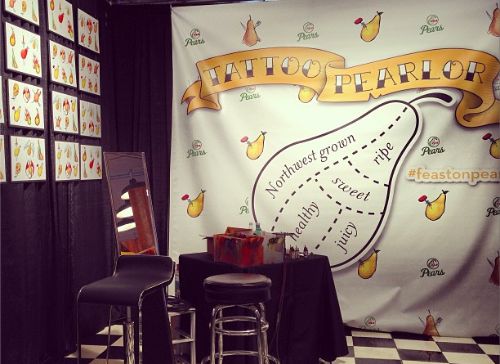 11) Post-Comfort, Bon Appetit's afterparty ingeniously took over E. Burnside's karaoke dive Chopsticks II, seriously upping the spot's food game with snacks provided by Andy Ricker and Pok Pok. To go along with 2Pok's wings, cocktails by Aviation took a Thai theme — yes, there was a drink with fish sauce in it. Paul Qui, Andrew Carmellini, Aaron Franklin, Karen Brooks, Cosentino, and like 5,000 other people were among the attendees:

12) The 2013 "Energizer Bunny Award" for Feast goes to Lincoln's Jenn Louis, who worked it all weekend: In addition to cooking for Eater's Thursday-night afterparty, Louis demoed at the Friday Grand Tasting, served an "unofficial" collaborative dinner with Paul Qui and the State Bird Provisions team, MC-ed the "Butcher vs. Fishmonger" competition, and finally, served up lamb tartare at Saturday's High Comfort.

13) And finally, we'll give the Feast team the last word: