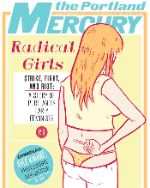 After a two-year-long tenure, Portland Mercury's restaurant critic Chris Onstad (who's also the creator of beloved webcomic Achewood) is stepping down. In a job posting on Blogtown, editor Wm Steven Humphrey announces Onstad is leaving to focus on his all-natural, craft soda company (Portland Soda Works). Interested in the gig? Pay is $125 per week (not counting expenses), and applications must be in by January 24. [Mercury]