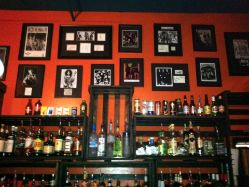 Sarah Curtis-Fawley, the founder and owner of Pacific Pie Company, handcrafts sweet and savory pies using local ingredients and old-school techniques. Before founding Pacific Pie with her husband Chris, Sarah worked as a criminologist and policy analyst, but Sarah's lifelong passion for food and Chris' longing for the meat pies of his native Australia sparked the idea for Pacific Pie. The couple began by selling pies at local farmer's markets in 2009, and today the business has grown to include two restaurant locations in Portland, a wholesale business, a catering division, and this Sunday's third-annual pie contest in honor of National Pie Day. But when she gets to unwind, Curtis-Fawley loves nothing better than to chill out at her favorite rock and roll bar.

If Chris and I have had a particularly stressful day at Pacific Pie, there is nothing better than sinking into a booth at Star Bar. It's dark, it's loud, and the charming owner Josh knows to bring me a gin and tonic before I even ask for it. The food is way better than it needs to be for a rock and roll bar, and the burgers are absolutely soul-satisfying. I usually opt for a spicy Damned burger [with pepper jack cheese, jalapeno chutney, and jalepenos], and Chris loves The Ramone [with bacon and cheddar]. Over the years we've hashed through many business decisions over drinks and fries at Star Bar, and we always emerge back into the daylight feeling a little bit better about the world.