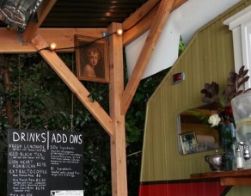 Radar restaurant owners Lily Tollefsen and Jonathan Berube have spent their lives in the restaurant industry. Tollefsen was literally raised in her father's restaurant on Long Island, and Berube tarted cooking professionally at the age of 15. Tollefsen grew up working summers at her father's restaurant, the Lobster Inn, in Southampton, New York, and did so until the restaurant was sold in 2012. The couple moved back to Portland in 2012 following the sale and spent several months scouting locations before finally finding a home for Radar on N. Mississippi, and a nearby veggie food cart that has served them well.

We both love Wolf and Bear's on Mississippi Avenue, just a few feet from Radar's front door. Their food basically kept us alive during the buildout of our restaurant and we still eat there frequently. The falafel are griddled instead of deep-fried, and super fresh. Tanna, one of the owners, renovated her grandfather's trailer to use for the business — his photo is mounted by the trailer's entrance. The care that they put into the food is evident throughout the menu. A couple of our favorites are the "Out to Lunch" and the "Sabich", but we've tried most everything on the menu, and it's all been great. Wolf and Bear's has a certain sense of home to it — personal and proud. There's a lot of love that goes into this little trailer and we love it right back.