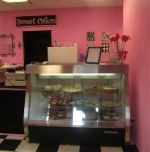 Gresham's now-closed bakery Sweet Cakes by Melissa, which drew attention last year after it refused to make a wedding cake for a same-sex couple, did indeed unlawfully discriminate against them, according to a just-concluded investigation by the Oregon Bureau of Labor and Industries. According to the Oregonian, the state, which bans discrimination against LGBTs in places that serve the public, "will now oversee a conciliation process between the two parties to see if a settlement can be reached." [OregonLive]