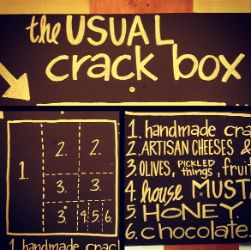 1) Southeast/Kerns: SE Hawthorne's charming cheese-plate cart Cheese & Crack has packed up its wheels in favor of an upcoming brick-and-mortar location, slated to take over the former Black Bike Cafe space across the street from the Laurelhurst Theater. According to co-owner Will Steuernagel, the 26-seat Cheese & Crack Snack Shop will feature a full cheese case ("think a little more déclassé" than other cases around town), a hot case, and a beer program run by Nathan Hall. The shop plans a February soft-opening; more as it becomes available. [EaterWire]

2) Hawthorne: A growler station dedicated entirely to to-go imbibing — no on-site drinking here — will open in early February on SE Hawthorne Boulevard. According to a press release, Growlers Hawthorne will take over the space once home to the Dollar Scholar shop, with co-owners Lucy Park and Jim Hillman offering 40 beers on tap, eight kombuchas, and a rotating handful of ciders, mead, and gluten-free beers. Growlers is aiming for a February 4 opening; in the meantime, find more information here. [EaterWire]

Shut Up And Eat PDX