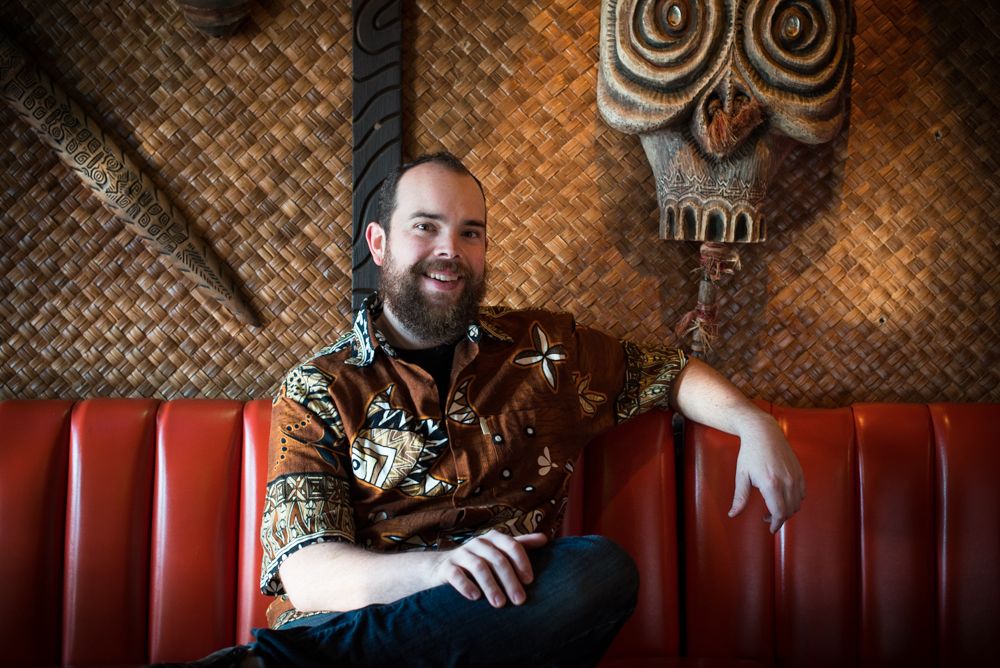 Hale Pele owner and bartender Blair Reynolds has such fond memories of vacations to Disneyland as a child, that he credits the theme park for much of the way he runs his bar. "As far as trying to keep the visuals strong, one of the aspects is to make sure that at every angle it looks good," Reynolds says. And there are a lot of details, including pufferfish lamps, bamboo, and even a real moat: think Disney's Jungle Cruise meets the booze cruise en route to Gilligan's Island. Hourly thunder and lightning rainstorms, a smoking volcano that rumbles your seat, and fiery drinks (many literally on fire) transport you from the dreary Portland winter to a warm and inviting tiki lounge experience.

Eater recently caught up with Reynolds and picked his encyclopedic brain about tropical drinks, rum lovers (and haters), and how Hale Pele isn't just a tiki-themed bar — it's a way of life.

How did you get into bartending?
I moved from California to Portland about seven years ago. I'd bartended in the Bay Area at a couple places, but here is where the passion really started. My first job in Portland was at Acadia, they've been around for about 12 years, consistently good, consistently high quality. Then I started doing tiki-nights at Teardrop Lounge, the owner saw that I was an obsessive passionate about tropical drinks, so he gave me free reign.

Do you remember the first time you had a tiki drink?
Actually the first time I can really recall going to a tiki bar was Trader Vic's in Emeryville. That's where the heart of tiki lies for me. It's a gorgeous location, overlooking the bay. A friend took me and I ordered a fog cutter, which is a blend of rum, gin, brandy, orange juice, lemon juice, and a float of sherry. It is a big drink, and it is potent. 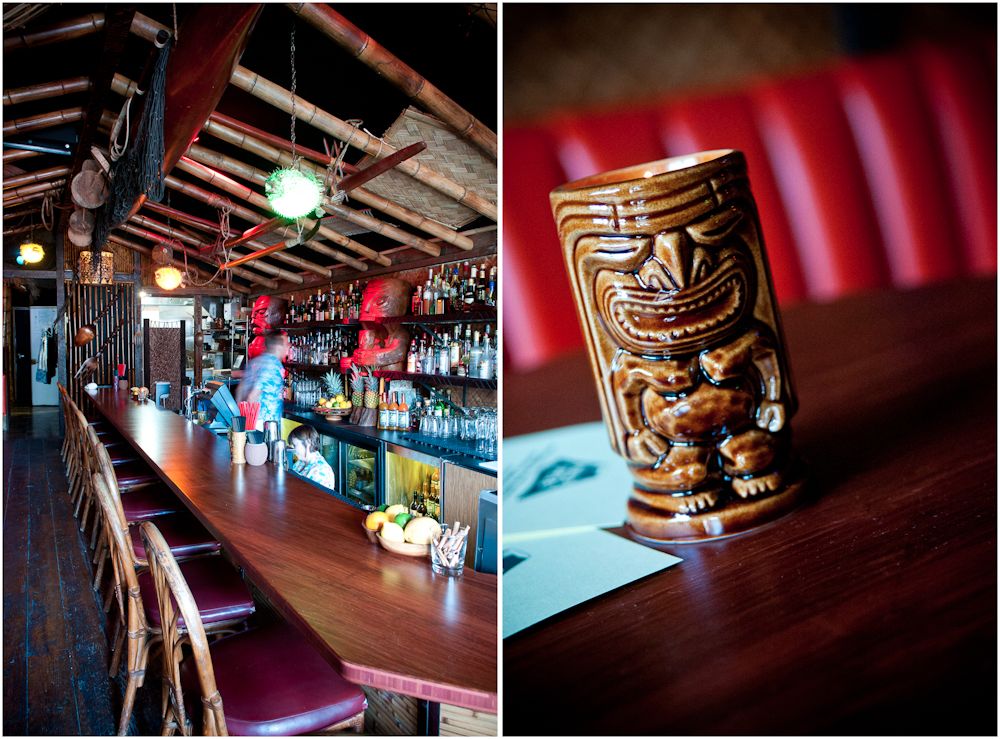 And that potent drink started the tiki love affair for you?
That was the drink that taught me that tiki drinks are not just about "this tastes like pineapple and/or coconut. And is super sweet." It's so much more — a whole different world to explore. I started off with a lot of Trader Vic's drinks. Tropical drinks have a different flavor component which is pretty rare outside the scene: baking spice. Clove, vanilla, almond, allspice, and cinnamon, great flavor profiles, and I can't have a drink without them now.

What else drew you to tiki culture?
Along with these wonderful tropical drinks, there's Aloha wear, exotica from Martin Denny and Les Baxter, fun décor, nice pu-pus and tidbits, and interesting food. So it's this whole encompassing culture. It's rare that you see a Prohibition-era bartender also listening to phonographs and consistently wearing the garters and vest, and what not, but when you go tiki, you kind of go full package. That makes it so fun. It draws in so many different kinds of people.

What was your biggest inspiration for décor and atmosphere?
We're a little bit of the opposite of exposed ceilings. That comes from two things: First off, how much I loved the Jungle Cruise, and second off, the major general from The Pirates of Penzance. Being originally from San Jose, California, I spent plenty of time jaunting about to Southern California. We often visited Disneyland — we had family that worked there — and occasional jaunts to Hawaii, all of that left a permanent impression. So we have a volcano here. If someone orders a volcano bowl, we'll set off the volcano and smoke starts coming out from under the booth and a sub woofer rumbles and rumbles. And we have thunderstorms every hour, on the hour. Lightning shoots out on the sides.

It does feel like there is an element of theater at work here…
I think every good bar man has some aspect of theater in them. Whether it's a love of theater or a practice. The great tag line, "even though you heart is breaking, laugh, clown, laugh." That bar is a stage, and you are there to perform and to entertain. It is all about keeping the guest happy, that veil of, when I'm here it's not about me.

What is one of your favorite dishes on the food menu?
We serve this beautiful Hawaiian bread — some friends that used to have Lilikoi, it has since closed, but they make our bread for us, and it is to die for. We take these beautiful big, thick loaves of Hawaiian bread, chop them up, butter them, throw them onto a cast iron pan, and serve it with a blend of ginger, guava, and Hawaiian sea salt. 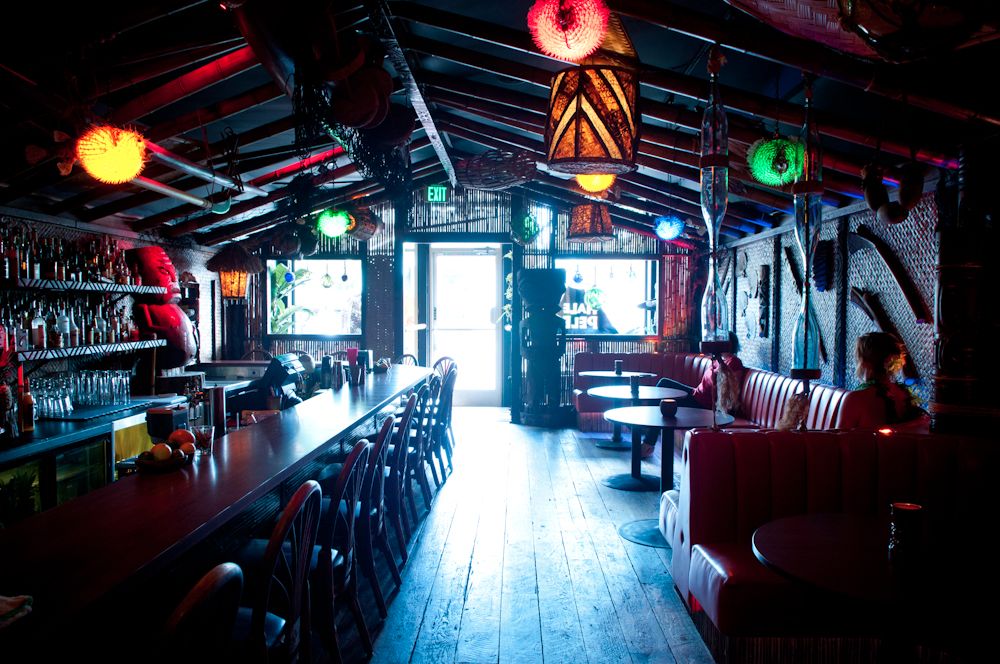 Rum sometimes has a bad rep in the spirits world. What do you say to someone who says "Rum? Ew."
That's a little bit like saying, "Color? Ew." More than other any spirit, rum is the wild frontier of liquor. Every country has its own regulation, or no regulation, but as long as it's cane based and distilled under 96 percent, it's rum. Or it's considered rum, unless you're talking rhum agricole or cachaca. We have bourbon drinkers come in here, and they say rum is too sweet. First off, bourbon is corn based, so that's going to be pretty sweet in itself. And a lot of rum is finished in bourbon barrels, so there's a direct connection right there. We have 238 rums. I say, "Give me three chances and I'm going to try and introduce you to something."

What are the most popular drinks at Hale Pele?
Naturally, the top seller is the Mai Tai. Someone who comes into a tiki bar for the first time usually orders a Mai Tai. It's a good gauge of a place, but we do have 42 tropical drinks on the menu: things on the sweeter side, the sour side, things on the strong side. Of course, the Pina Colada and the Chi-chi. Also, the zombie punch flies like hot cakes out of here, which is a suggested two per customer max. I've never seen it go past two, and I'm very thankful for that.

On that note, how do you handle cutting people off?
It happens a lot. Especially in a place where "Oh, these drinks taste wonderful and it doesn't even seem like there's booze in it!" Yeah, there's about three ounces of rum in there, and not all of it is just 80 proof. We like to slow down on service. We don't juice, like, if you order a daiquiri, I'm not going to serve you lime juice and sugar; that's dishonest. We make sure there's plenty of water on the table, suggest food, and if absolutely necessary we'll call a taxi. It's a fun place for groups, so typically their friends will take care of them, unless everyone is drunk, then it's a whole different ballgame…

Do you have a lot of regulars that come in?
There is an insanely strong group of regulars. Some faces I see two, three times a week, here for dinner and for the drinks. They enjoy what we do; they enjoy the people that work here. And really they almost become part of the family. It's strange having friends that are financing your dreams. But I guess that's part of the bargain. They help keep this running and making it happen, and we make it a good experience for them. A lot of people have become so much more than a guy that just comes in.

What is a typical weekend night like?
Insanity. We've been open about a year and a few months now. Apparently, people have heard about us now? We fit about 50 people maximum, 49 actually. We just recently put in a wait list at the door. Happy hour is a little bit slower; it's Portland's only literal happy hour. I'm fine with this being on the record: I don't like happy hour. We draw a certain kind of clientele that is happy to be here, and knows the value of what we do. So we decided to keep it to one hour, the first hour of business. 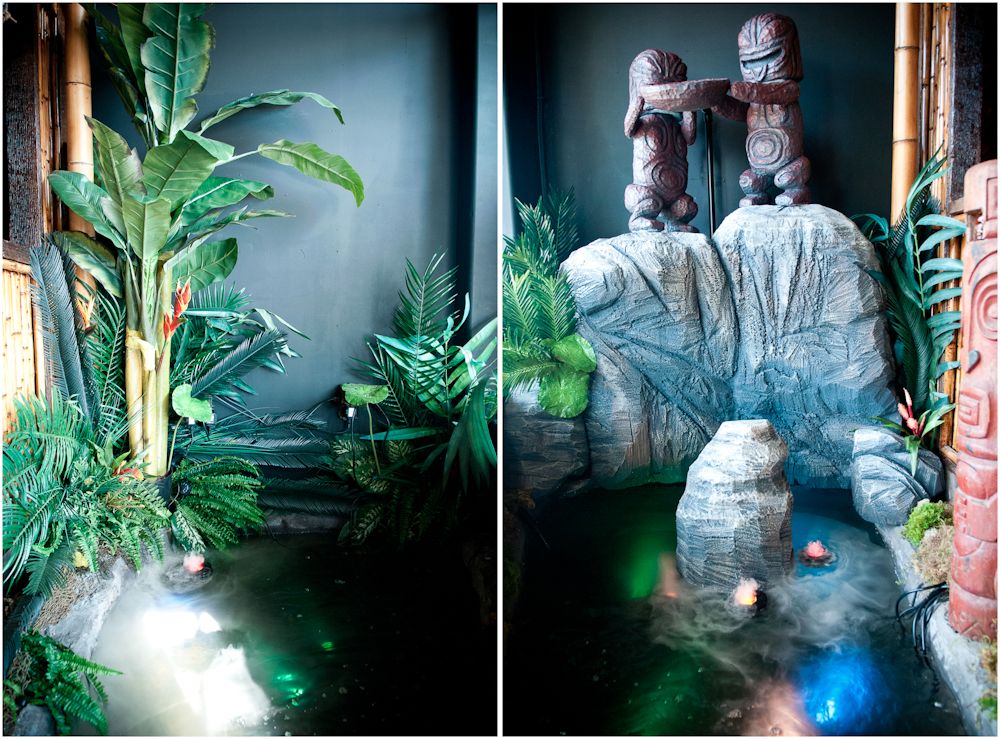 What else sets Hale Pele apart from your traditional craft cocktail bar?
We're a bar that is not afraid of blenders. So much of the craft cocktail scene has been "oh, blenders, we never, only TGI Fridays and Mudslides can be made out of those things." But the blender has a history. People like the texture, it's fun, it's different. It adds richness and depth. Steve Olson, a big mentor in the bar industry, says, "Take your craft seriously, but not yourself." That's what we do.

So would a blender be your must-have bartender tool?
Here, it's the Hamilton Beach spindle mixer. The bottom-up blender, that's great for a chopped ice drink. But the top-down mixer, it's like a malt machine type of thing. If you've ever worked at Burgerville you might know. The idea being, that we don't want to chop up the ice, but we do want to aerate the drink. Because that aeration — especially with like pineapple and passion fruit — is going to whip it up and make it rich, with a beautiful mouth feel. It adds depth and character and brings out a lot of the flavors, making a big, frothy delicious drink.
· Hale Pele [Official site]
· All Previous Hale Pele Coverage [Eater PDX]
· All Previous Barkeepers Coverage [Eater PDX]