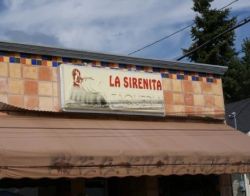 Nick Arnerich grew up in Portland and spent most of his formative years at his parents' restaurant Delevans. After cutting his teeth as a cook in Corey Schreiber's kitchen at Wildwood, Arnerich settled in Philadelphia and was hired at the famed Le Bec Fin, where he worked his way up to sommelier. In 2005, Arnerich left Le Bec Fin after two-and-a-half years to move closer to home, spending the next few years in California (including time at the much-lauded French Laundry).

In 2013, Arnerich moved back to Portland to pursue his dream of opening a restaurant in his hometown: Renata is slated to open summer 2014. And though he's newly returned to Portland, Arnerich says he loves "rediscovering" his favorite haunts, including his father's go-to spot in the '90s: La Sirenita.

My father grew up in LA and spent some time in Mexico, so he loves Mexican food. In the '90s, Alberta street was nothing like it is today. When La Sirenita opened up it was one of the places my father took us to all the time. As I grew up and after football games it became a staple. The Machaca Burrito is the best. I hadn't been back in over 13 years, but one day recently while walking on Alberta, my wife, son and I stopped in for a bite and of course I ordered the Machaca Burrito, a few tacos, and all of those great memories came rushing back. I grew up eating there and now I was able to share it with my family. The best part about it was the same gentleman was still running the cashier. We're both older now and we don't know each other's name, but we 'know' each other.