Anthony Cafiero on Cryovacs and the First Year at Ración

Share All sharing options for: Anthony Cafiero on Cryovacs and the First Year at Ración 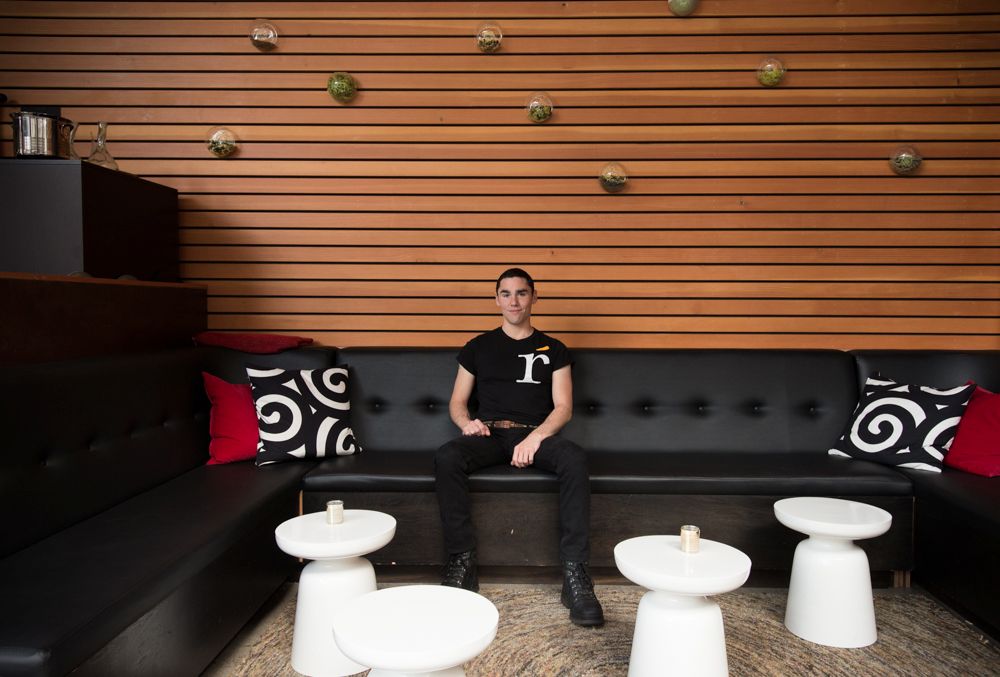 When Ración chef Anthony Cafiero entered Reed College as a fine arts major, he never thought he'd ultimately be exchanging his metal and woodworking tools for a Cryovac, plancha, and tweezers. But one year after opening his sleek modernist tapas restaurant in the westernmost section of the Pinot Brasserie/Corazón ruins, Cafiero's slowly but surely making strides in his quest to enamor Portlanders with avant garde cuisine, one sous-vide egg and hay-smoked maitake at a time.

Eater met up with Cafiero at the U-shaped bar that doubles as a front-row seat to the open kitchen action, and talked making lemonade out of the Corazón lemon, the trials and tribulations of having party animal restaurant roommates, pushing culinary envelopes beyond pork belly and pickles, and what happens when you sous vide a Hot Pocket.

You've cooked all over Portland: VQ, Paley's, Nostrana, Ten 01, Tabla, and Corazón, how did you end up in the West End, opening Ración?
Because I got it. I never thought I would open a restaurant downtown. This is the fruits of the Corazón debacle. It happened because after I left Tabla, [ChefStable restaurateur] Kurt [Huffman] called me two days later and was like, "Can you help me with Corazón? If you can't, we'll close it and open Ración." He made me a deal. In the end we made money that month I was there, but it was so far away from getting back in the black, so we split it into three spots. We did 14 popups for Ración, and we were cooking electric, so we were like, "Let's do electric, we don't need the hood, we don't need the middle spot, we'll just do Ración right here in this conference room. And Kurt loved the idea."

How'd the buildout go?
It was pretty easy. It was a $100,000 buildout, including everything. We pulled a lot of gear from Ping and Corazón.

You designed this setup yourself, right? With the exposed kitchen and surrounding bar, is it like being on stage every night?
I don't really pay attention, it's more about what's in front of me. The open kitchen is more like someone's awesome island in their amazing house in the West Hills, people are having fun, and they'll chime in. Some people are extremely interested in everything we do. Other people, it freaks them out when the chef presents a dish, but once you do it once, they're like, "Oh yeah, that's right, this place has interaction."

You've experimented with a lot of different styles of cooking, were you always interested in modern cuisine?
No, I actually rejected it for a while. But when Tabla's sister restaurant Ten 01 closed, I got two circulators and their Cryovac. And I had just gone to Spain so that was a good combo. I started using them and we started learning, trial and error-ing, and the first thing that happened was the sous vide egg, which went on the menu at Tabla. Then it went from there and we got more and more into it, I started bringing in more ingredients and hassling Provvista to start carrying all the fun stuff you see in those jars [on Ración's shelves]. 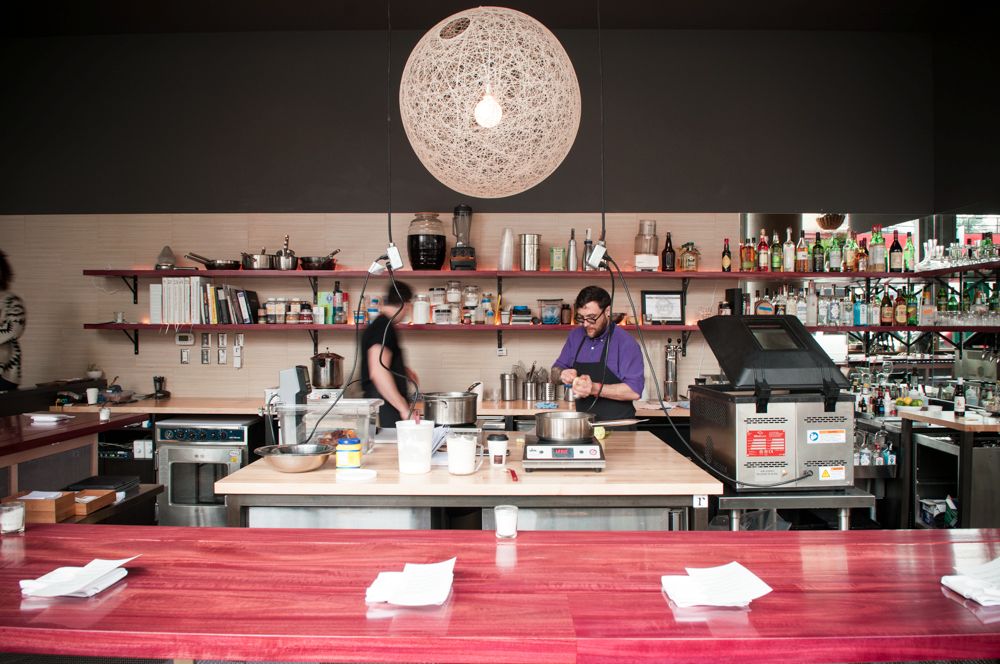 Modernist tapas are a pretty rare concept in Portland, how did people react to your menu?
If I'd done this on the east side it would have been different, I had so many regulars from the Tabla scene. But over here, this crowd doesn't know me, I have no credit, no reputation in this space. I have a weird entrance: You have to go through the lobby of a building to get here. And this is new cooking, avant garde stuff, it's scary to people. So we made our menu accessible, and cheap. There's a reason why my food's $11, why we have a $50 five-course tasting menu. We didn't want to freak people out. We wanted to make this like modern cooking 101. There's a pioneering, adventurous, fun feel to this restaurant. We've got be pushing envelopes in this town culinarily because if we don't we're going to be left behind. We don't have Michelin ratings in our town yet, come on... we're still stuck with this DIY, pork belly, eggs on everything, homemade pickles, and that's cool and all, but there's been a rejection of the "other" that's a little scary. That's why I'm very proud of us and Genoa and Castagna and Levant and Roe and Departure, for pushing something new.

How have people found you, what's your customer base like?
Lots of foot traffic, lots of travelers that found me because we have a sweet Yelp star rating and I'm like a block away from their hotel and it's probably raining.

You're really energetic. Do you sleep very much or are you up all night plotting new things to sous vide?
No, my sous chef's doing that. He gets like three hours of sleep. He's high strung. Tony, he's one of the best hires I've ever made, he's a wonderful sous chef. But no, we'll pull out the white board at the end of the night and nerd out and get a few things done. I try to be very bossy, like jefe-ish, and he's very creativeHe'll say, "How about this or this?" And I'm like, "Nope, nope, yep, too expensive, nope, that'll look stupid, okay, do that."

What's the weirdest thing you've ever stuck in the sous vide?
A Hot Pocket. These guys came in to eat and they were joking about how one of them likes crappy food and he was like, "Well, it's not like you could sous vide a Hot Pocket." And I was like, "Actually we can." So, we sent someone over to Ma & Pa Market across the street, bought a Hot Pocket, Cryovac-ed it, then threw it on the plancha and toasted it. It was perfectly melted through and warm, so we whacked it up and plated it all cool and served it to them. It was actually good. And once I got a pack of the frozen White Castle hamburgers — with the bun included, they're frozen complete — so we warmed them up in the tank and then we put them on the plancha to sear them off. Tongue or octopus would have been a cool answer, but it's Hot Pockets and White Castle hamburgers.

What have been some of your most popular dishes?
Sous vide egg, always. All variations of it have been popular. I had these chickpea gnocchi on that were super popular, that was just something I did at Tabla years ago. The potato and truffle dish on the menu right now is excellent. We do dishes now that are based more on a vegetable more than a meat. I think vegetables are the new frontier, and cooking vegetables sous vide is the best thing in the world. It's the flavor. I can get a rosemary carrot to be like the rosemary carrot. How do I get juniper into beets roasting them? Can't do it. Stick them in the sous vide? Hells yeah.

What have been your biggest learning experiences this past year? What advice would you offer someone else thinking about doing this?
Don't be too obsessed with your idea. We had to change this restaurant like three times. I mean, we wear chef coats, now we consider ourselves fancy dining. One of the biggest mistakes may or may not be taking reservations. The people that make reservations love that we take them, but we're also not full every night because we take them. If I opened another place I don't know if I'd do reservations. 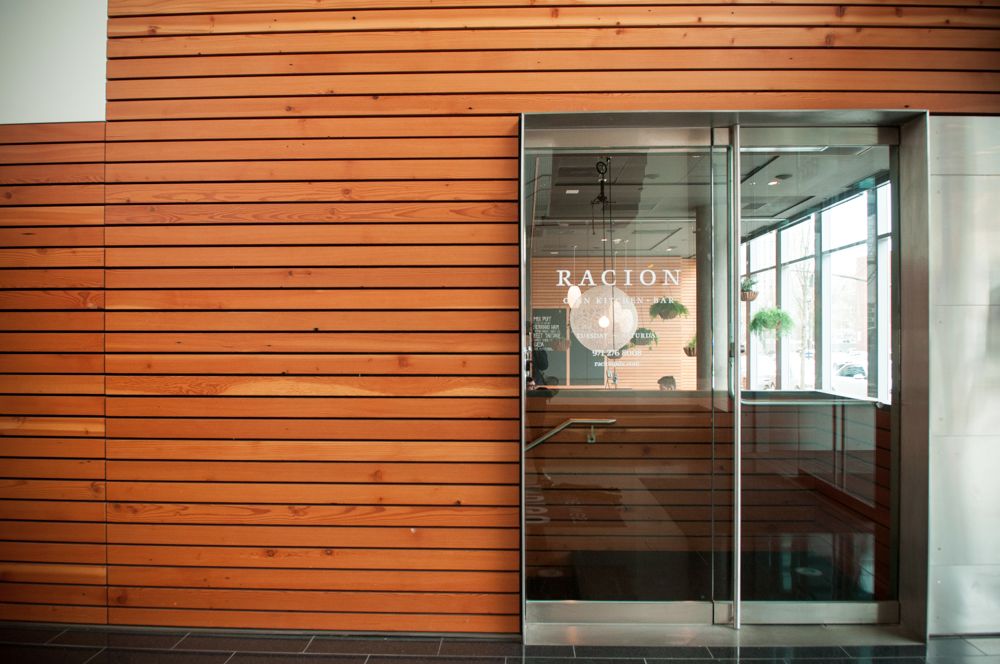 You have a lot of delicious neighbors — you share the building with Blue Star Donuts, Grassa, Lardo. What's the dynamic like? Do you trade shaved foie gras for blood orange glazed doughnuts?
We get so many leftover doughnuts. Blue Star drops off doughnuts like three times a week. And of course Grassa and Lardo and Ración trade and borrow from each other, like oranges and onions and cream. Sometimes we'll do a big transfer, like, "I have a case of this, I don't want it, do you want it?" I sold them my Brussels sprouts when I went on vacation. They use my Cryovac for preserving lemons. We eat a lot of Grassa and Lardo, they give us a lot of food, and those guys come over here for shots at the end of the night.

So it's nice having restaurant roommates.
Having restaurant roommates is both awesome and sucky. It's great on my rent and it's horrible for: "Where are my Silpats? Where is my stuff?" Hiding in a corner or somewhere. We don't get stuff returned, people don't run plates so well, it's not the easiest. We're like the weird OCD tech kids and Grassa is like the party animal hipster kids and Lardo is like the kids that just don't care. It's jovial, but it's not efficient — we walk around a lot looking for shit. But it's fine, it's helps us exist and be in the black, and it turned us into Restaurant Row. We're the fancy restaurant on the block and I dig that.

Does it feel like it's been a year?
No, because there are so many things not built yet. There are some parts that are still not put together, and we're meeting about that this week to figure it out. The lounge is changing, we're putting a massive 16-person table in there, so I'll be able to seat large parties and groups of four, and we're taking the banquettes out because it's hard to eat in the lounge and I want people eating and drinking in there.

Any exciting future plans?
Randomly, it's bread. Bread from the new Lardo bakery. I rejected this for months — I do not like bread, I will not do a bread service, it's a waste of tummy space and it's not my style and it's not very Spanish in my opinion — but I can't wait to offer bread that's custom for us. And I can't wait to do cool different fats for it, smoked butter and seasoned aged olive oil in a barrel and smoked this and cured that, maybe an egg yolk dip for your bread, or nettle butter. Maybe we'll make our own salt too, a little sea bean salt, who knows?
· All Previous Racion Coverage [Eater PDX]
· All Previous One Year In Coverage [Eater PDX]