American Local's Nickolaus Gets Cheesy at Shut Up & Eat

Share All sharing options for: American Local's Nickolaus Gets Cheesy at Shut Up & Eat 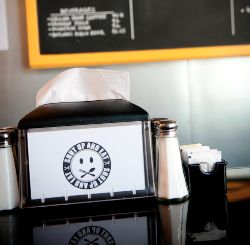 The American Local's co-owner and manager Jenny Nickolaus didn't always know that she wanted to work in the food and wine industry, but the industry always wanted her. From her first job making pizzas at age 15, to numerous bartender and bar manager positions in her native northern California, Nickolaus excelled at the speed and service required to run restaurants. Only after a mind-altering meal at Charlie Palmer's Aureole did she finally admit that restaurants were her calling. Shortly afterwards, Nickolaus packed her bags for Portland to attend the Western Culinary Institute. Nickolaus she has been planning the American Local for five years, collecting dishes from many cross-country road trips with chef Chris Whaley. But when she's not on the road, you might find Nickolaus at her favorite sandwich shop: the just-expanded Shut Up and Eat.

Shut Up and Eat has awesome sandwiches all around but their Broad Street Bomber — a.k.a. the cheesesteak — is the best in town. The steak is really flavorful and the cheese sauce is really cheesy. I like it because it is not trying to be authentic, it just tastes delish! That's what we're trying to do at the American Local, so we're kinda meeting a kindred spirit in that sandwich. Any of the breakfast sandwiches are also awesome and the pan-fried chicken cutlet sandwich, parm style is fantastic. I'm a stickler for good service, even at a casual place. The service at Shut Up and Eat is always warm and sweet. I am super excited because they are building a deli that adjoins the sandwich shop and we are severely lacking in great delis here!

Shut Up And Eat PDX