Share All sharing options for: Escape From New York's Phil Geffner on 30 Years of Bringing People Together

Welcome to a special Pizza Week edition of Lifers, a feature in which Eater interviews the men and women who have worked in the restaurant and bar industry for the better part of their lives, sharing their stories and more. 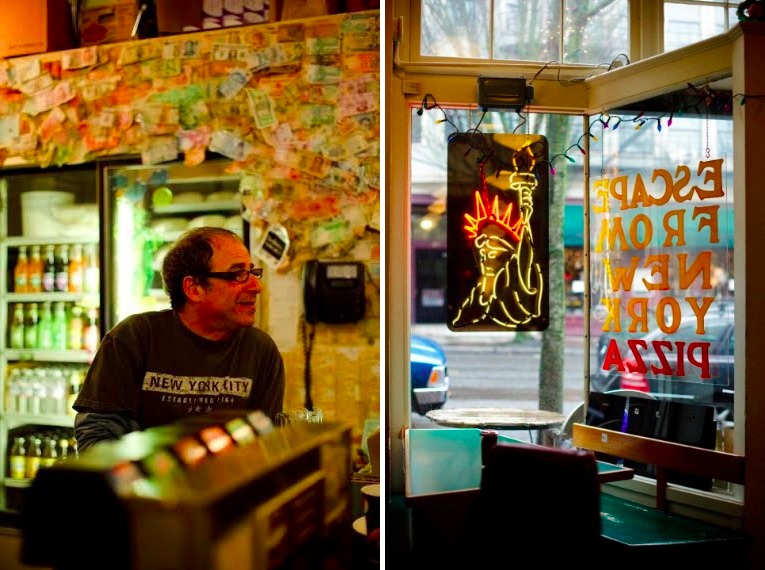 Phil Geffner is the real thing. For 30-plus years, the gregarious and semi-gruff Geffner has been the main guy behind the counter at Escape From New York Pizza, both at its original location downtown just below SW 10th Avenue as well as its second, current home on NW 23rd Avenue. Long before Voodoo had tourists lining up for doughnuts, Escape, as most folks refer to it, had locals lining up on SW Alder Street (where the Alder Street food carts now live) for a slice of pizza. Yes, just a slice. In 1983 — long before the age of artisan, organic, wood-fired bubblers — EFNYP was the first very place in Portland where you could buy pizza by the slice: authentic New York-style, thin-crust pizza that was easy to fold and cheap on the wallet.

Although pizza has been very good to Geffner, it isn't Phil's life. For fun, the 59-year-old spends three days a week white-rafting the White Salmon River — in the winter. For even more giggles, he spends his birthdays and holidays in Las Vegas ("nobody cares about Christmas in Vegas," he says). Eater sat down with Geffner over two Tanqueray and tonics down the street from EFNYP (at a another longtime NW 23rd haunt, the Nob Hill Bar & Grill), to talk shop, customer service, and why it took him so friggin' long to accept credit cards.

Do you remember your first slice of pizza?
Yeah, pizza, man! I grew up on the Lower East Side of New York City: 14th Street and Avenue C. My dad, George, sold candy at a department store and my mom, Bea, was a librarian at P.S. 122. When you grow up in New York pizza, is like the best thing ever. They had bright neon signs advertising slices of pizza for just 15 cents. B&G and Stromboli, those were my places. That was some good pizza.

How did you end up in Portland, Oregon?
I had this girlfriend who lived up in Harlem. We decided we both needed to get out of [New York]. We put all our stuff in laundry bags and started hitchhiking. Once we hit the West Coast, my girl headed to Oregon and I was going to head down to Arizona. She talked me into coming to Portland. When I first came here I worked in an elementary school in Gresham with kids who basically beat up on other kids. It was a great job.

So how did you end up owning a pizza place?
During the summer I ran an ice cream truck. Even though I liked working with the kids in Gresham, I was making a lot more money selling ice cream. That's also when I realized there was nothing to eat in this friggin' town. There was nothing to snack on. There was Judy's Hot Dogs and that was it. At that time, the World War II generation owned all the businesses and they all catered to very different types of customers. There was no place like in New York where everybody came together at one spot. And I kept thinking, "This really sucks."

How much did you know about pizza making before you opened EFNYP?
Like I said, I was from New York, so I knew how to make pizza. It's not taught. You just know it. I got friendly with the guys who make pizza. It's not that big of deal and it's not that hard. It's dough, sauce, and cheese. That's it. I wasn't trying to figure out how to get rich. It was a social thing. I thought, "If this shit doesn't work at least my friends have something to eat." Pizza is the love food. It brings people together. That is when I decided I had to do it.

How did it all come together?
We got the oven from Seattle. It was $1,500. And then we got some ingredients. By the time we opened we had 40 dollars left over. We made some money and then got some more ingredients. I didn't really know what I needed at the time, but somehow it worked.

From the start there were lines out the door, right?
Thank god, because it needed to be really busy from the beginning or it wouldn't have worked. If I knew all I needed to know to run a business, I don't think it would've done it. We really didn't know what we were doing, but it was so busy that it all worked out. From the very beginning we had health insurance for our employees, because that's what I wanted to do for them. But if I knew all the work that went into getting that before I did it, I think I would've been too intimidated to do it. 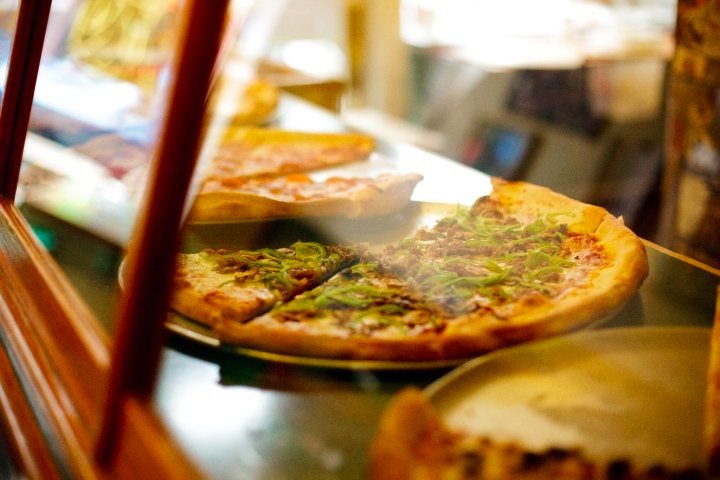 Why did you open the second location on NW 23rd?
We were so busy it was like sitting on top of a rocket ship. There were plenty of people that wanted us to franchise, but I never wanted to do that. I wanted a life that was friendly, easy-going, and people-orientated. But we were way too busy for just one store — we even opened a kitchen nearby just to make the dough. Like I said, I didn't want to have two locations, but we needed to have two just to make it all work. We were also in our downtown spot for 10 years before they eventually made us leave and knocked down our building. Then we were back down to one. We will never have more than one location.

Why are your employees so blunt to customers?
That's how it is in New York. At the time we opened here there wasn't counter service or pizza-by-the-slice. Nobody had that kind of thing here, but they did in New York and we wanted to transplant that here. I always thought I was a nice, polite guy and that I wasn't rude. I always thought it was much more rude to make people wait in line while you chitchat with a customer. It was more of a cultural thing. And I just wanted to get people through the line.

EFNYP seems to treat everybody the same, including power brokers and celebrities…
They got it. It was a break for them too. They didn't have to be uptight. They could be themselves. Everybody left them alone, because nobody really gave a shit about who they were. We never kissed their ass. One time [former Blazer] Kiki Vandeweghe called up and asked how long it would take to get a pizza. Our employee, Gary, said it would take 45 minutes. That's when Kiki said: "This is Kiki Vandeweghe. I will ask again: How long will it be for a pizza?" And Gary just said: "45 minutes." That's how it should be. Deep down they know they are being assholes. And we don't treat assholes any different than any other customer. A business is a reflection of who you are. It feeds your soul.

In 30 years you haven't made very many changes to the menu or the business…
That all changed last year. At our annual holiday breakfast my employees came out like it was a mutiny or something. I was just trying to hand out bonuses. But, man, they came at me and said, "We're going to start selling salad." I told them "No friggin' way are we selling salad." That's when my sister, Lauren, who also works at EFNYP, said, "We are selling salad… don't be stubborn… we have it all worked out." So even though I didn't want to do it, we started selling salad. And everybody liked the salad. So now we sell salad.

And, as you know, in 30 years we've never taken credit cards. Every day there would be a fight between a customer and an employee about not taking credit cards. Every friggin' day for 30 years! [Interviewer's note: At this time Phil goes on for quite a spell on his theory of why the credit card system in the United States doesn't work.] I was fighting against the wind. But I learned, from the owners of Salt & Straw, about the Square [cash reader] thing. With the Square I pay a flat fee and don't have to deal with the banks. Even though I didn't really want to do I was able to accept that. Those two things are the only things we've changed in 30 years: salad and credit cards. We're good now.
· Escape From New York [Official site]
· All Pizza Week 2014 Coverage [Eater PDX]