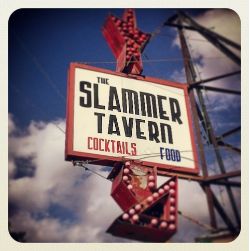 Allison Blythe is currently the marketing director and event coordinator for the Mitchell Wine Group, but she's also a Portland restaurant veteran with several fine-dining spots on her resume. Blythe started out bussing tables at Pazzo when it first opened in 1991, then worked at Celilo in the Governor Hotel when she cocktailed in the jazz bar. After that gig, Blythe landed a job at a new restaurant which was just about to open, the now-closed Wildwood. Blythe spent nearly six years working at Wildwood, before joining the opening team at Bluehour, where she worked off and on for several years.

After stints are Genoa, Lucere, Roux, and Nostrana, Blythe taught restaurant management at the Oregon Culinary Institute before being recruited for her current position at Mitchell Wines, where she has been for three and a half years. But even with a history of fancy dining and drinking, Blythe still loves to get down and dirty at one of her favorite SE watering holes, the divey Slammer Tavern.

When I am not drinking Champagne or having lavish meals at some of Portland hippest eateries, I've been know to slum it by spending time in the Slammer. It looks like a shady dive bar with potentially dangerous clientele, [but] the Slammer is actually a pretty cool spot. I love this place! The vibe is great… really cozy with super low ceilings, Christmas lights, and the nicest bartenders around. For my cocktail, I stick to a pretty classic Tanqueray and tonic, hit up the jukebox, and share hilarious stories with my best girlfriends. Really fun people watching too, and just a stone's throw to some other favorites such as Rum Club, Taqueria Nueve, Trifecta, and if we're feeling sassy, Dig A Pony.

Photo of the Slammer courtesy Michael T. Via Foursquare