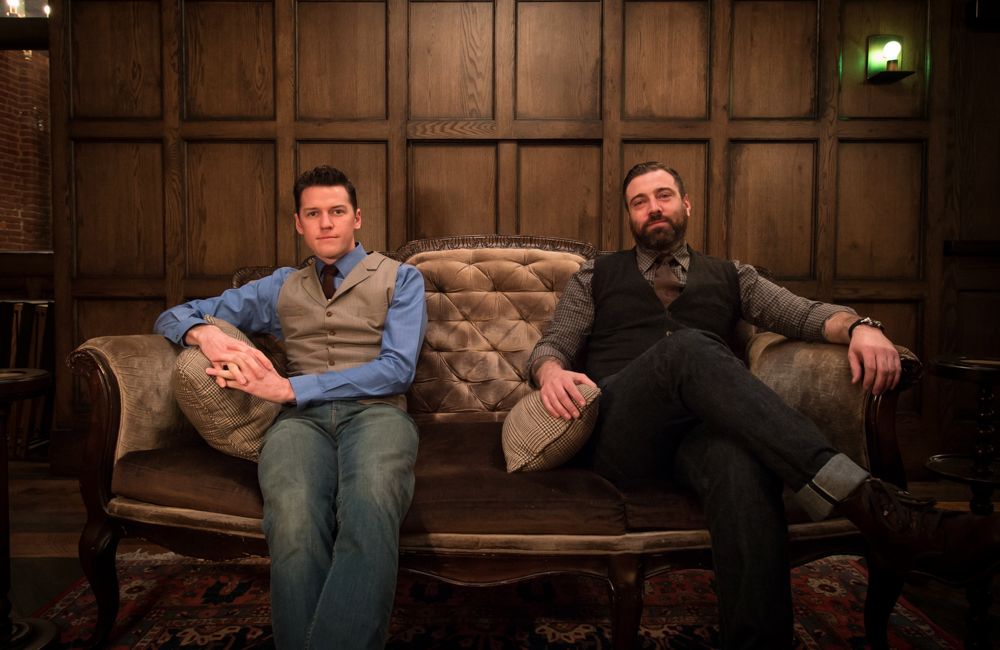 Good things come to those who wait, especially to those who brave the crazy, three-hour-long lines for a high-backed chair or a spot on a leather couch at downtown's booze athenaeum, the Multnomah Whiskey Library. The walls are lined with more than 1,500 bottles of browns, gins, tequilas, and other more obscure hooch varietals, and vested bartenders bring the action to you on antique rolling carts, fully stocked with liquors, bitters, stirrers, and shakers. But why such a long quote for a table, even after almost six months in business? According to owner Alan Davis, it's a combination of reservations made by those enrolled in the Library's membership program, and ultimately, the limitations of a 65-seat space where chairs and tables are sat like a restaurant. "The experience we provide is totally contained tableside," Davis says. "Whether two of you are sitting in club chairs, or six of you are sitting in a little living room cluster, that is your experience where you sit. We're not in the business of allowing as many people in as possible."

Due to these wait times, not only has the Whiskey Library hired a manager specifically to run the door, but coming this spring and summer, the bar will be open on Monday evenings to accommodate walk-in guests only. Eater caught up with Davis and manager Jake Heil to chat about the long waits, spirits education, one hell of a Long Island Iced Tea, and the fastest way to get cut off and kicked out the Library.

When is the busiest time to try for a table?
JH: There is no real peak in the evening for us. That's obviously a wonderful problem to have. When it comes to the mood of people dealing with that three-hour wait, it's a very important thing that we make sure they feel how honored we are that they waited that long for the experience. I know that would try my patience under any circumstance and the fact that people do, is pretty incredible.
AD: We don't have rules posted on the walls like, "We don't allow standing," but because we provide table service — and we have four carts that are moving throughout the room to provide cocktail and pour service to you at your table — service would be interrupted if we have people standing around or walking around unnecessarily. Not to sound strict, but given the nature of our service, we can't let more people in. We can't provide that experience if other people are prohibiting it.

Do guests ever try the handshake with a hundred to get bumped up on the list?
JH: It happens, definitely. Everyone tries everything. It's not something that gets anyone anywhere. Our hosts have a lot of laughs about the ways people attempt. It's really the person who just stands there and won't stop asking ways in which they could possibly bribe: Rather than just offering the cash, they'd rather just say, "What if I gave you cash?"
AD: Yeah, my business partner and I continually make it very clear, so that we empower the door. We say, "Look, we will contact you directly and let you know if this person is coming in," but if someone is name-dropping, no, because we truly believe in this being very egalitarian. We don't want that to be the case. And we all know a lot of people in this business, and it just doesn't work. It's not fair to Joe Smith to have someone come in and manipulate the door. We have a list; it doesn't matter who you are or what you're wearing. It's first come, first serve. 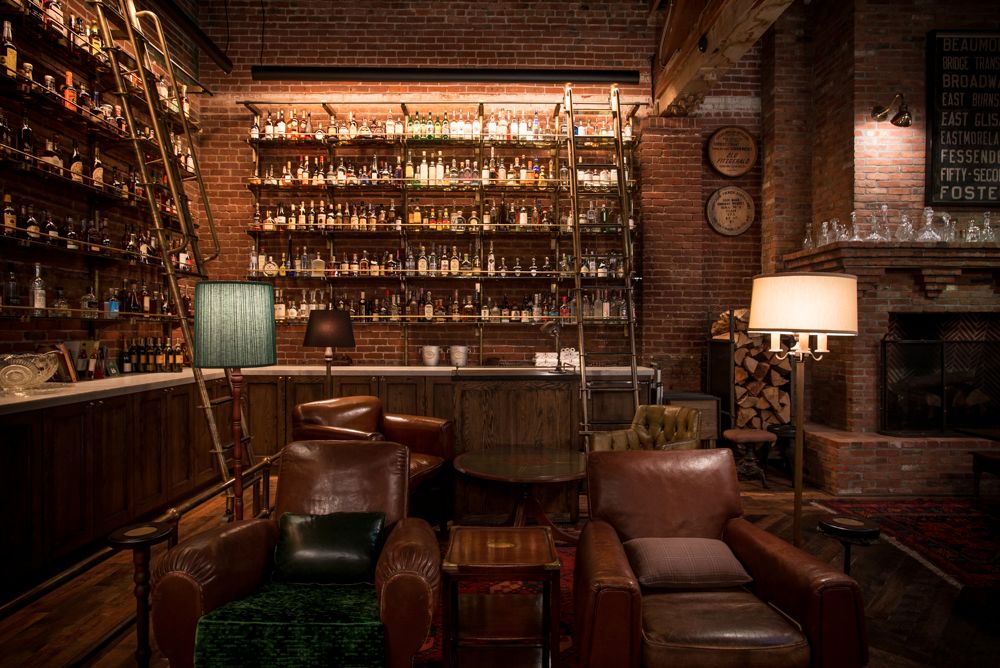 How has the membership program worked out?
AD: We sold a certain number of memberships, we're still new, so we are going to go into a moratorium for a while, to see what that volume of reservations looks like. Members are able to make reservations and they get priority to our educational events, and some events that are just for members. What we're really trying to do is establish relationships with people, so we can provide the best hospitality possible. We want to get on a — depending on the individual — a first or last name basis. We want to get to know you, what you like to eat, what you like to drink. That's what sparked us having a membership program. We wanted to be able to track our relationships with our guests, so we can anticipate things, and we can say, "You tried these four wheated bourbons last week, let's get into the rye bourbons this week."

It must be really difficult to tell someone they have to wait that long…
AD: It's really painstaking, we all want to take care of everyone. It's hard to have people not being able to get in. Hosting is probably the hardest job, hands down.
JH: As a host, you get to see the person who has come back from a three-hour wait, and they are looking at you as the person that just did that to them. Then, you take the menu and you explain the menu, and then you hand it off to the bartender, who that person couldn't be more happy to see. In many ways it's thankless.

With the enormous list of liquors available, how do you learn and teach the staff about these products?
JH: Like any good learning, it has a lot of elements to it. First and foremost, since the crew came together, before we even opened, we began our training. We are working with an incredible staff of self-driven, curious, and intelligent people, who are happy to be doing what they are doing. Everyone is interested in the craft, background, the cultural relevance, and how spirits are made. We spend a lot of time teaching each other. The whole bartending staff is very diverse in terms of their knowledge base, where we all come together is certainly whiskey and general oak-aged, but that's not the limitation by any means. We do have a formal education system within house, but the day-in and the day-out, context, and conversation with the guests is where the real learning happens, that's the meat and bones of it. That's what makes you remember.

The amount of bottles lining these walls could feel a little bit intimidating...
AD: We have two different menus. Looking at our big menu — what we call the Bible — can be overwhelming. That's something we encounter everyday. And really it's about helping people ease into the experience. We have what we call our quick menu, which is an abridged version, that sort of surveys each category. On a monthly basis we change that list to make it a little bit easier and approachable. And duly, it's a gorgeous space. So people may make assumptions about price point — that it might be exclusive or prohibitive. Reality is, we have 400-500 bottles that are under 10 bucks a shot. 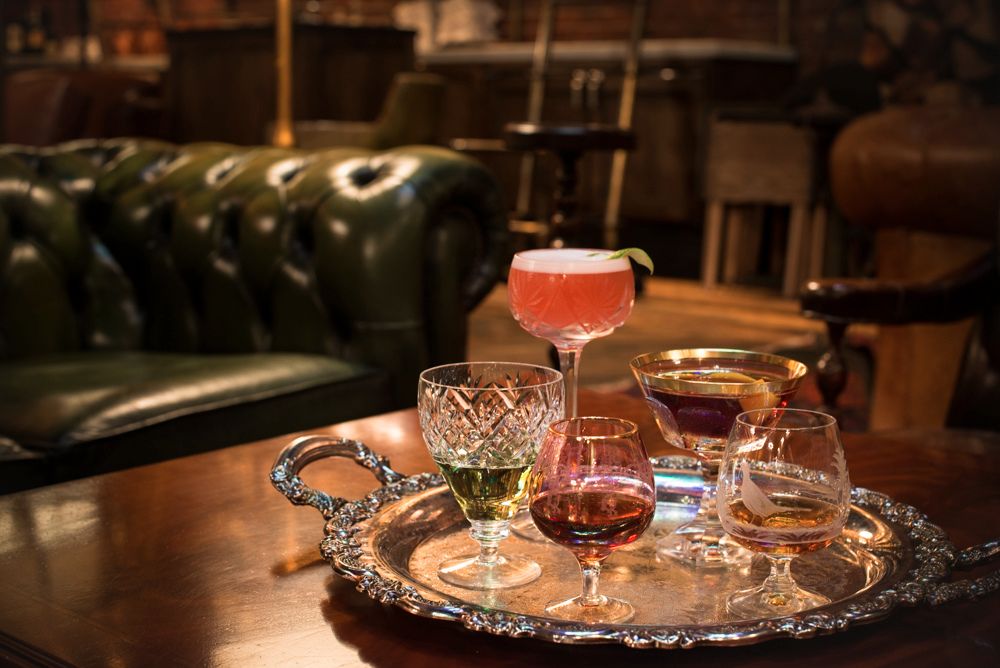 What's the most common question the bartenders get here?
JH: The most common question for our bartenders when people first come in is "What do you like?" A lot of people just want to bypass the whole menu thing and start the dialogue immediately.
AD: Fireball. But we don't have it. [Laughs]
JH: We have exactly two ounces of Fireball in house and it stays in a small bottle on a shelf. [Laughs] It's great, because people do want to say "What do you like? Guide me." And the quick question back is, "Well, what do you like?" Give us a basis point in the spectrum and we will find something that you haven't had before and that you're going to enjoy. It's a fun process.

So what do you like?
AD: Scooter's Jello shots? [Laughs] Scooter's is lovely bar around the corner. Actually, I drink bourbon and rye straight-up.
JH: I am a person of mood, most definitely. When the world is your oyster on certain fronts, why do the same thing over and over again? However, I will absolutely name-drop one of the cocktails on our list. It's a classic, and it's been around for a long time, the Tipperary — black bush Bushmills Irish whisky, green Chartreuse, and punt e mes.

Do you have some good cut off stories?
JH: We've had people try to climb the ladder. We've had people actually climb the ladder. And that quickly ends the experience and frees a table. [Laughs] Absolutely. But there is a reverence to the way people drink here, and it doesn't get as rowdy. Less than a normal spot, so it makes the moments of when it does happen all the more exciting.
AD: The good news is, is we don't really draw people who want to be rowdy. We've all experienced groups coming in, I don't want to use adjectives, but a rowdy group of guys stand out like a sore thumb in here. It's very quick that people change their behavior.
JH: And not to say the environment is somber or even quiet. It's just the way people are interacting. But it's up and there's laughter. There's a buzz, but it's contained. People aren't really trolling for some action. 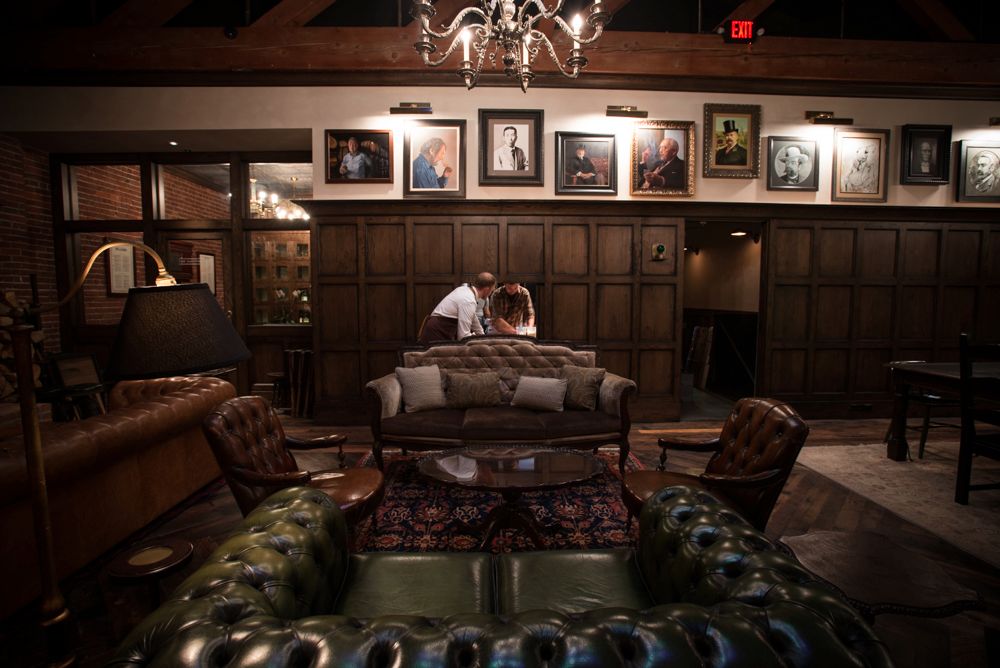 You probably get some celebrity clientele in here...
AD: [Laughs] Ahhh, yes. We've have various folks from different industries that people would call celebrities. I don't know, I'd probably err on not saying who.
JH: It makes sense for people, who might be well known for whatever reason, for them to enjoy the concept that we execute here. Because of the fact that it's seated, because they can sit down and know that they can be surrounded by the people they came with.

Can someone order a Long Island Ice Tea here?
JH: We have made maybe, two? The Long Island is special, and Lemon Drops are delicious. It's a deal when you order a Long Island here — and this isn't official by any means — but this is how it played out in the two times it has: We're going to choose which [liquors] go in there, because we don't have a well. We have way too many options, and way to many flavor options to limit ourselves to a well. The two times they've been made the bartenders had a good time putting them together, though it might not be the most cost effective.

And lastly, what is the most necessary Gatekeepers tool?
AD: The more you can be on the level and be humble, and understand we all like to eat and drink. I know those places I go where I can expect a wait, and it's part of the process: It's [about] how that gatekeeper engages with you, the honesty and the empathy.
JH: The biggest tool that I need to have during service is an eye on the need of the staff. That's the mechanism for everything. What do the bartenders need? What do the hosts need? There are so many intricate pieces to this service, to the way the door is run, to the cart service, to having to climb ladders to retrieve bottles, sometimes a dozen at a time for one order. I need to have that perspective very sharp.
· All Previous Gatekeepers Coverage [Eater PDX]
· All Previous MWL Coverage [Eater PDX]