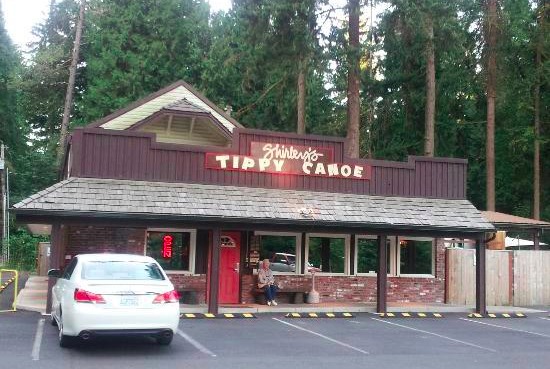 Johanna Ware is the executive chef and owner at Northeast Portland's Smallwares. Ware grew up in Barrington, IL, learning how to roast the perfect chicken at her mother's side. After attending the University of Oregon, she moved to New York and landed a job at Brad Farmerie's Public, knowing she would one day return to Portland and open a restaurant. After Public, she moved to the legendary Momofuku, where she continued to learn from renowned chefs such as Peter Serpico, David Chang, Quino Baca, and Tien Ho. When she returned to Portland with her husband, she worked as a sous chef at Nostrana before opening Smallwares on Northeast Fremont.

But it was a recent search for a specific sandwich that led Ware to Troutdale's Shirley's Tippy Canoe at the mouth of the Columbia Gorge. "Shirley's Tippy Canoe is one of those places that I have passed for years on the way out to swimming holes or hikes in the Gorge but never stopped," Ware says. "Earlier this year I was on a quest to find a club sandwich in Portland and it led me to Shirley's. It met my needs and deeply surpassed them."

The décor is cozy, and there is a ridiculous monkey stuffed animal by the fire that I am kind of obsessed with. I really enjoy diner food like sandwiches that come with sides of au jus, entire pages of menus devoted to omelets, and classics like Reubens and thick clam chowder — all of which Shirley's has. The club sandwiches have choices like adding on chicken-fried steak! A proper three layers high, it is so huge that the knife through it is all that holds it together. I took my staff here on the way out to our Mt. Hood holiday retreat. I told everyone they should partner up, that way you had two things. After a couple of their 10-inch Bloody Marys and some beers, sandwiches were going around the table like a carousel. It is rare that I say this, but I would eat everything on the menu, and it is my goal over the next few years.