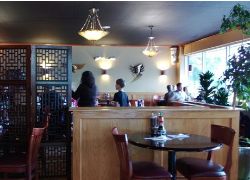 Kasey Mills moved here from South Dakota in 2001 to work and learn in the kitchens of Portland, and since spring 2007, Mills has been part of the Toro Bravo family: He helped opened John Gorham's acclaimed restaurant as the sous chef, and three years later, was promoted to the working chef of Toro and made an owner in the company. Now Kasey will be leaving his home of seven years to be the chef of Gorham's new Mediterranean Exploration Company, set to open in mid-July in the former Riffle NW space. Until then, you might catch him slurping up pho on NE Sandy, at Pho Gia.

I would have to say one of my favorite spots to eat off the beaten path is at Pho Gia on NE 19th and Sandy. My wife and I have been coming here in the winters for years for their pho. We don"t usually stray to far from the menu but we love the Beef pho, the chicken, and — as funny as it sounds — they definitely have the best vegetarian pho I have had in the city: It's a peppery broth with red bell peppers, carrots, oyster mushrooms, squash, and tofu. The other amazing stand out is off the menu: If you ask them [for]... the Vietnamese salad they do Romaine lettuce with cherry tomatoes, soy sauce macerated onions, and crispy tofu.The service some times can be a little spotty, but it's easily overlooked by the smell of the inviting broth that's in front of you face.