Share All sharing options for: Sean Davey on Eight Years at Savoy Tavern and the Bar's Upcoming Changes 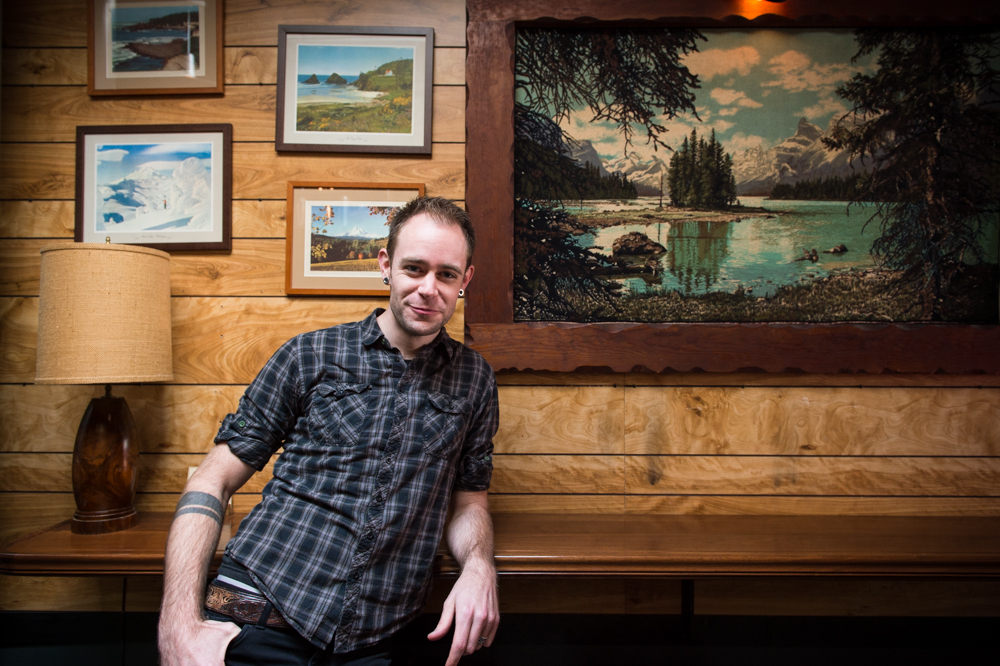 The corner of SE Clinton and 25th has been home to Savoy Tavern since May 2005, and in restaurant years, that's a long damn time — especially in this town where new spots pop up on, what feels like, a weekly basis. But this neighborhood tavern has been grinding away, frying up cheese curds, mixing mules, and offering killer happy hour deals, all while these new restaurants were just a twinkle in their owner's eye. And bar manager Sean Davey has been standing tall behind the Savoy bar for (pretty much) the whole run.

The near future will hold some big changes on the bistro side of things. Currently, Savoy feels like two separate spaces: on one side a dark, cozy Midwestern basement complete with mounted taxidermy; and the other, a bright, clean, white-tiled open kitchen. According to Davey, "The language in the tavern is going to all come through the restaurant, it's going to be one cohesive place." The exact menu and full scale of the remodel are not public yet, but the PR-speak on the website gives us some hints: "Our goal with this change will be to bring prices down, expand the offerings of burgers, sandwiches and other items, while enhancing quality and service." Eater caught up with Davey to chat about his thoughts on the coming reboot, copper mug stealers, his own underage drinking, and running into to Crispin Glover (aka George McFly of Back to the Future) in a "quiet, dark space."

When did you know you wanted to get into bartending?
Well, I suppose that may have began when I was in high school and both my parents were working and I discovered their liquor cabinet, but there's not a whole lot you can do with Godiva chocolate liqueur and amaretto. But I made some stuff happen. And I don't know if it's wise in saying, but I also did some distilling in high school. My buddies and I looked up plans on the internet, because the internet was in full bloom when I was a kid. We made a rum still. We didn't know what we were doing at the time, but we made some hardcore moonshine. We put in pears, and then we'd eat the pears, and then we'd run around in the woods. I grew up in upstate New York, so we did this all in like proper backcountry. We just had a great time.

You've been at Savoy for a long time now, what about other industry jobs?
I had a series of real industry jobs that were all dishwashing or soda fountain stuff. I worked at a Friendly's in upstate New York — making milkshakes, washing dishes, and all that. When I moved out to Portland in 2003, I was stumped by what a person can do here to make some money. I had just turned 21 and I thought, "I'll take one of those bartending courses!" So somewhere I have degree, a mixology degree, from a one-week program of mixing colored water. On one hand it's really ridiculous, but on the other hand it gets your speed and your memorization skills down in a mock bar environment. You didn't know what the hell the drinks tasted like, but you could mix classic drinks.

So how did you end up working for Peter Bro?
I just started walking the streets and finding who was looking for help. I ran into Peter when he had his arms full of boxes on his way out to his car from Savoy. I put my resume on top and said, "You look really busy, but I want a job here." He called me back two weeks later, and that was eight years ago. 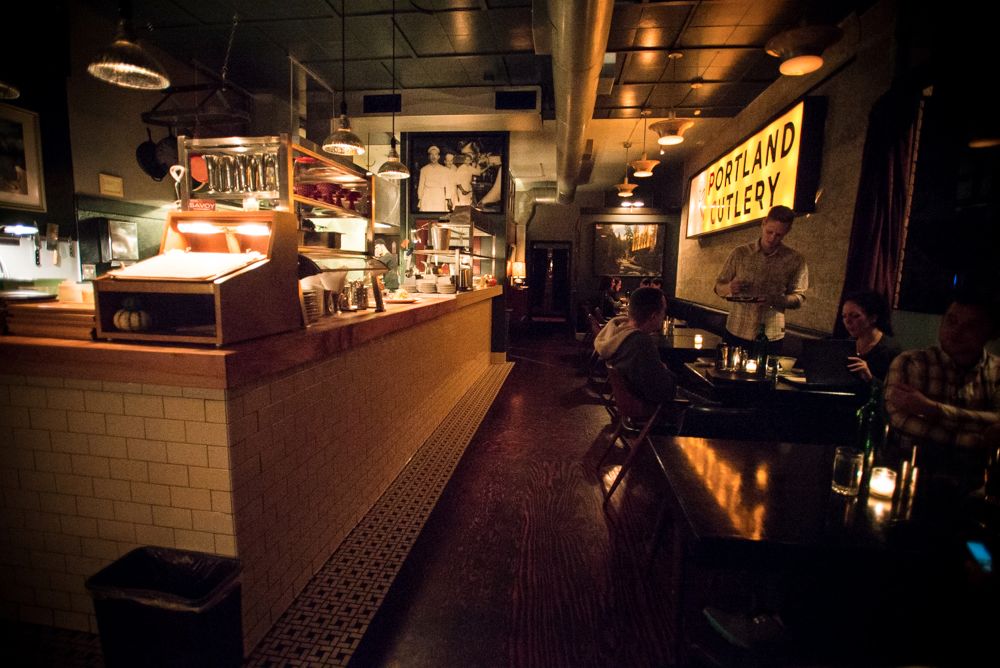 Let's chat about what you can share about the future changes. Are you excited?
It's not without trepidation, but I'm super excited. We're slowly making changes, because we don't want to alienate any of our friends and guests. Every year I find that we become better, our food has gotten better, our drinks have gotten better, the environment, the atmosphere, the service, is continually growing. Now that with the advent of restaurant row and the Division eateries, it's very difficult to keep up. If we were to charge what we probably should in order to keep up with that sort of business, we would lose all of our friends and guests. So let's just go back to what we started with, what we're good at: beer, meat, and cheese. Good stiff drinks. Well-crafted cocktails that are affordable. I have no problem with keeping a five dollar cocktail menu. So these are things we're thinking about, we don't know exactly where they are going, but it should be exciting.

There must be a good regular following here…
On any given night I know like 75 percent of the guests on a first name basis. So many of them have become close friends with the people that work here. We go out bowling; we go to shows together; we have movie nights; we play ping pong. It has become like a family and that's why I've stayed here for eight years. I've certainly had opportunities to go elsewhere, but I don't want to leave this place.

How about celebrities?
In being two or three doors down from the Clinton Street Theater, we see a lot of interesting things. My friends are going to hate this, because I tell it too often, but it's just so obscure. Crispin Glover. Mr. George Mcfly himself. He had a movie come out and it's so strange. It's like him sitting in a cave — I haven't seen the movie, just a trailer — but it's him sitting in a cave and there's like this darkly poetic voice over and naked women in masks groveling at his feet. So weird. Apparently, he got so animated just opening his film over there, that he fell off the stage and twisted his ankle and hobbled over here. He asked Peter, who was working the bar at the time, if we had a "quiet, dark place" for him to sit. Unbeknownst to me, I rode my bike here and was hauling it down to the basement. All the lights were off, I'm putting my stuff away, and I walk out and see fucking Crispin Glover sitting in a chair in the dark looking at me, and I'm like, "What the hell is going on?"

Do you ever get a rowdy crowd?
I'll preface all of this with the fact that, Savoy is, and has always been, such a mellow place. And we have our environment to thank. You've got the Reel M Inn, the Clinton Street Pub, and Dots. They work as such a wonderful filter for those that want to dance on tables and throw up in the corner. [Laughs] And that's awesome. And I do love those places, don't get me wrong, but it definitely weeds out, that sort of, um, I don't know what you want to call them, but that unsavory type of clientele. We always have such an awesome quality of guest here.

How do you go about cutting someone off when it's necessary?
In my tenure here, I've maybe had to cut off maybe three people? I'm just straight honest with people. If it's someone I know, I just put my hand on their shoulder and I say, "I love ya; I've been there. But get some rest, here's some water. Let's get you home safe sort of thing." 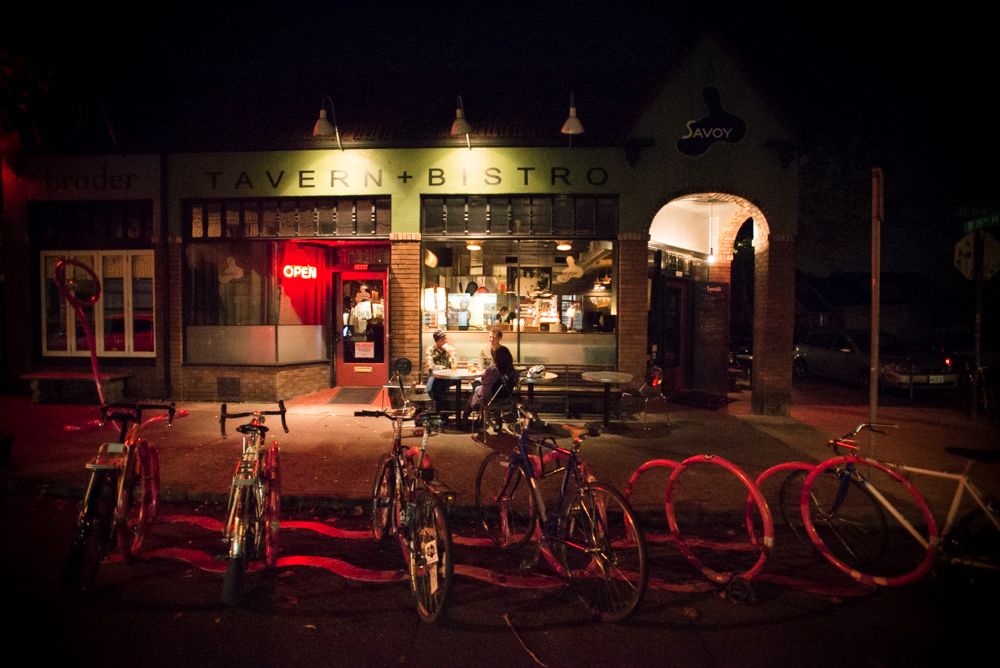 What are your favorite drinks on the menu?
We now do bottled cocktails, which are really fun. Basically, every other day or every few days, I make Portland's biggest cocktail in a giant vat, stir it up, bottle them, put their own little cap and press, and put them on ice. You just crack 'em open. It serves two, but basically, it doesn't have to serve two. Also, our Mule variations, which is a shout out to Mr. Tom Waits — he has an album called Mule Variations. The Milwaukee mule is basically a Moscow mule, but we do a ginger-infused vodka, a Kentucky mule with bourbon. We do a mezcal mule with mezcal, and that's a lot more earthy and spicy, due to our house mole bitters with ancho chile and cocoa nib. They fly off our shelves, you've seen how many mule mugs we have and sometimes we're hard pressed to find one on the shelves.

Speaking of looking for mugs, there have been rumors of mule mugs being stolen from bars. Does that ever happen here?
That's always been a problem. I trust the majority of our guests, but come outside seating time... Last year, we discovered some mule mugs going missing, so for people sitting outside — it sounds lame — but we do ask for a deposit. At the end when they don't steal it, and we get it back, we just clear that deposit away. Mule mugs are not cheap, it's lovely hammered copper. Back before we had this amazing back stock, and at the end of the summer we had maybe three or four left. And I would have to explain to people, this is unfortunate, but some collateral, please? I mean, otherwise we won't be able to serve the drink properly. It's ridiculous.

What's the most important Barkeepers tool?
It's always been friendliness. It's super simple, but it means a great deal. If you walk into a place on a busy night, and nobody looks at you, nobody gives you a glass of water, no one acknowledges you, I'll walk away. Something as simple as the bartender looking at you and smiling and saying, "I'll be right with you." That's my philosophy, to just be be friendly with absolutely everyone that comes in the door.
· Savoy Tavern [Official site]
· All Previous Savoy Coverage [Eater PDX]