Share All sharing options for: Jeffrey Morgenthaler on His Upcoming Cocktail Book and Clyde Common Craziness 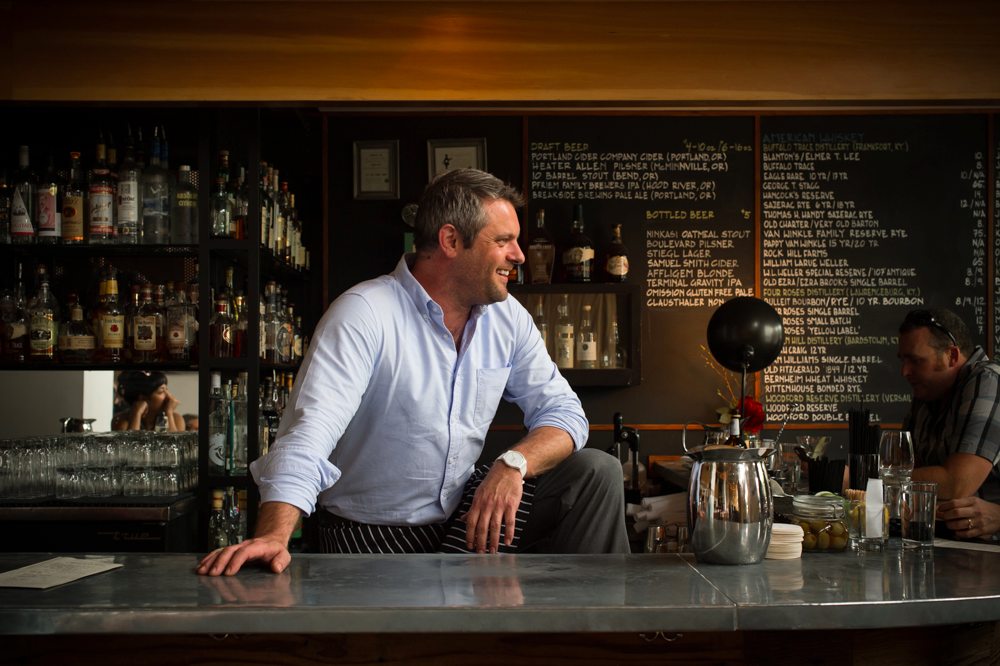 Jeffrey Morgenthaler is just as good at multitasking in real life as he is behind a bar. Along with those five shifts a week he has slinging drinks at Clyde Common and Pepe Le Moko, Morgenthaler writes a weekly column for Playboy, has his own popular cocktail blog to keep up with, and somehow found time to publish a cocktail book focused on the technique of making cocktails, The Bar Book (hitting shelves June 3). And he must be doing something right, with five total nominations for the Clyde team at this year's Spirited Awards: Morgenthaler, solo, is up for two of the five, in the Best American Bartender and Best Cocktail and Spirits Writer categories.

Morgenthaler didn't always think he'd be a bartender: In fact, he has a degree in architecture and tried that way of life for a little while. "I was always building things and making things. I knew at a very early age that I was going to be an architect," Morgenthaler says. "And then I got out of school and into the field and I was like, 'This is fucking terrible.'" He soon came to realize that his "hobby" (bartending on the weekends for fun and a little cash) could actually be a career as well. He started in Eugene in '96 at a "real dive over on the other side of the tracks," he says, where he mainly "poured beer and made meatloaf sandwiches." Eater caught up with Morgenthaler to chat about his new book, how he absolutely hates writing, his honorary status as a Wisconsinite, his apron collection, and even after almost 20 years of bartending you still have that "oh, shit" moment on Friday nights at 8p.m.

Have you always wanted to write a book?
No, I hate writing. My blog has been up for about 11 years, or something like that. I absolutely hate it. But I like having it out there. I just don't like sitting down and actually doing it. But, I had an idea years ago for a book, and I didn't want to do your standard coffee table book. Most of the bar books that come out these days are sort of all the same. You get some level of notoriety as a bartender and then you put out a book — either about yourself and your drinks or your bar and your drinks — and it's a lot of recipes that nobody ever really makes and a lot of pretty pictures. 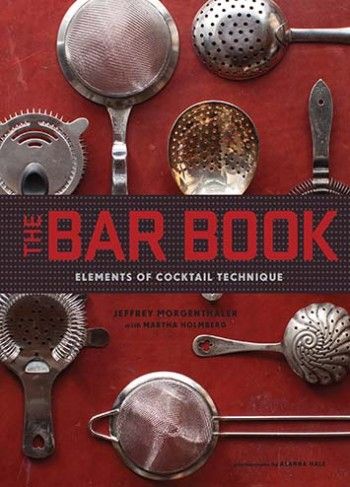 I wanted to do something instructional. No one really talks about technique, and it's one of the three main principles behind making a great drink: the recipe that you follow, the ingredients that you use, and the techniques that you employ. So you can have a great recipe and some great ingredients, but if you don't actually build this drink with the proper technique, then your drink is not going to be as good as it could be or should be. And it's the same with food, you can start with all the wonderful, local, farm-fresh stuff that you want, and you can go grab Thomas Keller's cookbook, but if you don't actually know what you're doing, your food is going to suck.

So if you hate writing so much, how do you make yourself do it?
My method for writing is I get very stressed out about it. Then, I procrastinate which makes me more stressed. And then, the fear kicks in, so I procrastinate some more, and then right before it's due I sit down and a I write it. [Laughs] Pretty much my process. The whole thing for me is like finding a hook, as they say, or an angle, so I roll it around in my brain until I come up with something like, "Oh, that's the way in for me to start spilling." I've never taken any writing classes, I just sort of, blah, barf some words onto the page, and then hope someone can clean it up.

How has Clyde Common changed in your five plus years manning the bar program?
Oh, my god. Well, I mean, it's changed a lot. One of our philosophies is that we always want to make it better every day, you know, we want to make it just a tiny bit better than it was the day before. And that runs through, whether it's the facilities that we're using, or our drink menu, or our training — we're constantly trying to improve. And I think that's a lot of the reason why I've had such low turnover with my staff. My staff's been there forever, you know, they're all kind of iconic in their own way now.

What's going through your mind behind the bar at 8p.m. on a Friday night?
"Oh, shit. Oh, shit. Oh, shit." That's pretty much it. Especially at Clyde, it's constantly just about to come off the rails. It's just about to be too much. And it's like you're standing on a precipice and you're looking down and you're going, "Oh, fuck. Oh, fuck. Oh, fuck." And that's all that's going through my mind. Clyde's so crazy, you're pretty much in the weeds from the minute you start until the minute you finish. I've worked in restaurants that sort of have this ebb and flow, and where it's busy, and then it's slow, and you go on break, and then it's busy. But at Clyde it's just a wall of people from the minute we open to the minute we close, which is great, but it's a little scary sometimes. 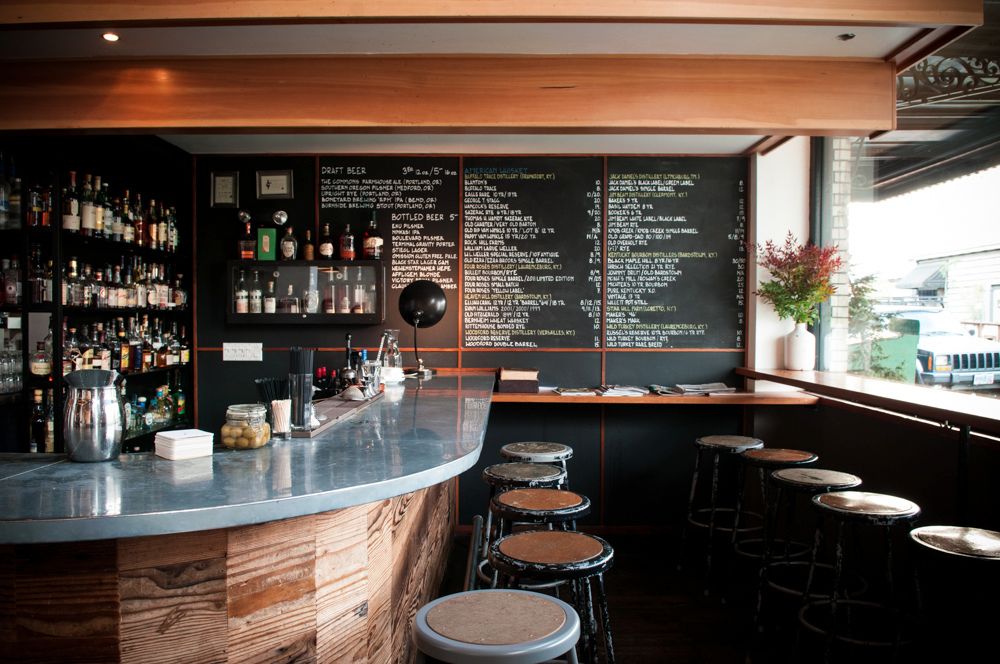 Are there a lot of regular clientele that come to Clyde Common?
Being in the hotel, we have these long-term regulars, people come in all the time, but it's only like once a month, or some people we only see like once a year for an event. We get to know them. It's really cool for them, and for us, to know that they'll go to Clyde Common and see the same faces behind the bar that they've been seeing for years.

So you've made some friends from your years tending bar?
That's part of the process at every bar I've ever been, we have people that we've become close to. I remember at my job in college at the Tiny Tavern, there was this huge group of kids that had moved into the neighborhood from Wisconsin. They sort of took over the bar, and I became great friends with those guys over four years. It was really cool, because they taught me a lot about Wisconsin-style drinking, which is kind of the coolest way to drink, ever. The first thing is that there is a lot of beer involved in Wisconsin drinking. How to make a brandy Old Fashioned. The ice cream Grasshopper, stuff that I've actually become pretty well known for, like championing on the internet, saying this is a valid way to drink. I get emails all the time with people asking me where in Wisconsin I'm from, but I'm from California. I've never even been to Wisconsin.

What's the most popular drink at Clyde?
There are two drinks that really define us. The "Bourbon Renewal" is probably our most popular drink: According to my computers, I sell more of that drink every year than others. We're talking like 10,000, like some fucking crazy amount number... maybe it's 5,000. [Laughs] It's bourbon, lemon, cassis, bitters, and a little bit of sugar. It's just a whiskey sour, basically with some fucking berry flavoring, but it's really good. I came up with that drink in Eugene, and it always did okay in Eugene, but when I moved to Portland and put on the menu and it was immediately popular. I even see it on other bar menus around town. 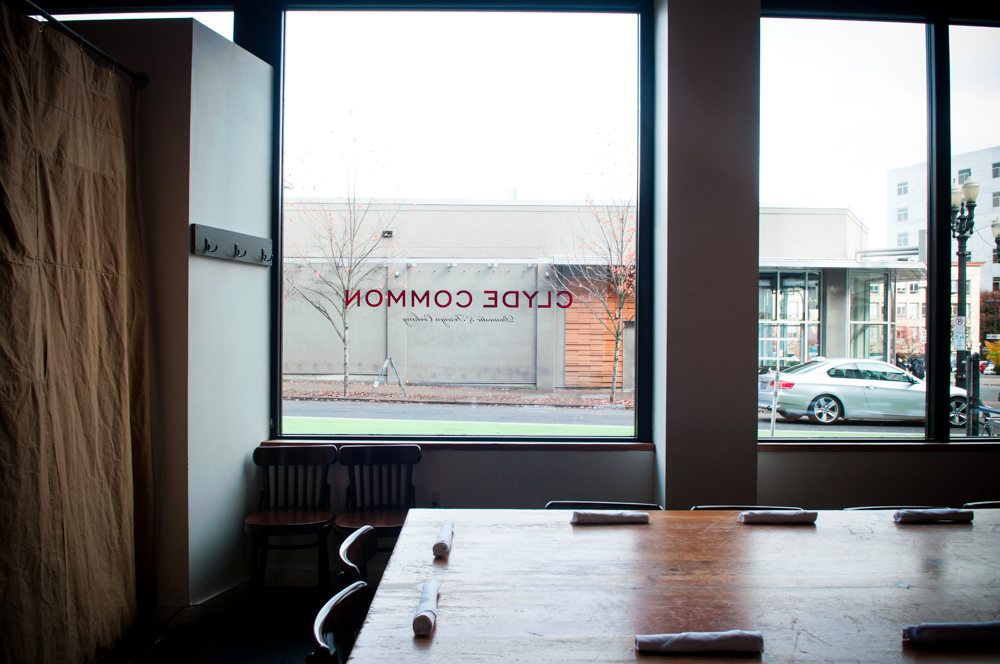 Where would we find you on a night off?
At home writing. [Laughs] But my favorite thing to do is to go out to dinner. You'll find me at the bar at Nostrana with a glass of wine and some amazing food. But typically, on my days off, I'm not at the newest bar, trying all their drinks. I'm actually a total introvert. When I'm not at work, I'm usually just at home watching TV and on the computer.

What's your most important Barkeepers tool?
I am a little bit of a dinosaur, in that the one tool that I literally cannot bartend without and I won't even dare to step behind the bar without, is an apron. And it's funny, cause I feel like a lot of bartenders don't even wear aprons anymore. It's sort of not very cool. In fact, a lot of my staff doesn't even wear aprons. But I always, always wear an apron behind the bar, and I always have from day one. I have a whole collection of aprons at home, sometimes I'll even wear a goofy flowered apron to work, but that's my most indispensable piece of bar equipment. And personality wise, my snarky sense of humor? I mean, most people in bars can take a joke.
· All Previous Clyde Common Coverage [Eater PDX]
· All Previous Barkeepers Coverage [Eater PDX]