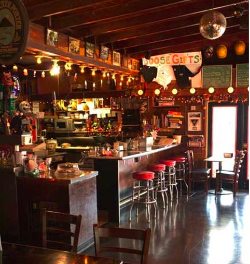 Peterson has worked nearly every job at the family-owned and operated restaurant starting at age seven — when he cut onions (for RingSide's famous onion rings) once a week when his Dad would bring him to work — then working his way up, dish-washing, serving, and eventually managing. Peterson says it's the family connection that makes RingSide truly special, so it's no surprise that you would find him at another Portland institution when he's looking for a quick bite: Goose Hollow Inn, owned by former Portland mayor Bud Clark.

There are the times when my wife is out of town or working late when I seem to find myself at Goose Hollow. It helps that it is directly on the path between RingSide and my house. The corner booth is where I relax with a Reuben and an ice-cold lager. For me it isn't a macro, it is always something local and at Goose Hollow, it is ice cold. To accompany the Reuben I love the potato salad. This is the only place in Portland that I will order a potato salad: Somehow it seems like Mom made it, surely the result of being made fresh in small batches. Depending on the day and the special, there are times that I will also wash this down with one of their home-made soups. Being in that corner booth for the Reuben and lager is such a respite from the stress of the day and a way to just settle down before heading up the hill home.