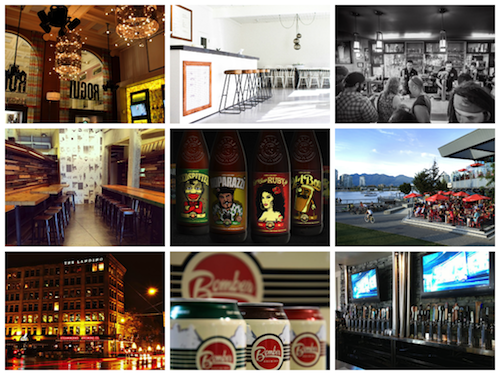 VANCOUVER— The Vancouver Craft Beer Week kicks off today with nine days (who said hopheads could count?) of craft-brewed fun, competitions, and beer-paired dinners, all with a hip-hop theme. Get familiar with the territory with this indispensable guide to where to drink craft beer in the city. And to keep it boozy, if you're visiting over the weekend, the Tequila Expo is in town: Here's an Eater Instant Expert cheat-sheet on how to handle the tasting room like a boss. [EVAN]

SEATTLE—Beer lovers (aka the entire city of Seattle) got some especially good news this week: San Francisco's famous, 25-year-old craft beer spot Toronado is opening a location in the Emerald City this summer. Expect a constantly updated list of craft beers, including hard-to-find options. [ESEA]

SEATTLE— Tom Douglas is at it again. The chef/restauranteur is opening a cantina, possibly called the Lone Stranger, definitely downtown. The Mexican spot on Fifth and Lenora will seat around 40, with a menu built around homemade tortillas. Also new: Book Bindery, the fine dining spot sandwiched between Fremont and Queen Anne, is getting a new (to-be-announced) name and a new chef: Nicolas "Nico" Borzee. Eater Seattle has details. [-ESEA-]

VANCOUVER— Signs of summer have been cropping up on menus across the city, so Eater Vancouver maps 16 places where you can get fresh-off-the-plane-from-Italy burrata. City chefs have reacted to a story in the Chicago Tribune last weekend which asked the eternal question: Should restaurants smile and roll over when Yelpers attack? Or should they tell them where to stick their review? [EVAN]