Kelley Swenson started his very first shift behind a bar just as so many young industry people do: the "real" bartender cut his hand on a broken wine glass, so Swenson was up to take his spot. And with a Mr. Boston Bartender book as his guide, he'd found his calling. "At that time, it was a really unique world, with guys smoking cigarettes on extensions and drinking champagne cocktails," Swenson says. "It was totally different than what I'd seen before and I was really taken with it." Now, Swenson is leading the charge behind the bar at John Taboada and Giovanna Parolari's latest spot Angel Face — a pretty little European bar with handpainted flowers on the walls, oysters on the half shell, and famously, cocktails ordered on a case by case basis, sans list.

Swenson recently chatted with Eater about the idea behind omitting a cocktail list, the bar's most popular orders, and why "we are making drinks that we didn't know we'd normally be making."

What was the idea behind omitting a cocktail list all together?
The idea of having no cocktail menu was not necessarily such a super, super big deal in our mind. It was relatively quick conversations — thoughtful ones — but it made intuitive sense to the three of us. We wanted to tie in this business with some of John and Giovanna's other businesses — combining their philosophies, with some of my philosophies on service and cocktails. At Luce and Navarre, it's very much tied to traditions and there's an appreciation for simplicity and eloquence. We are doing a similar thing here by presenting mostly classic cocktails to people. By letting them choose their classics, we're giving them an opportunity to not have to even necessarily deal with a cocktail menu.

What are the most common drink requests?
We get a lot of Old Fashioneds, Manhattans, and martinis. We get a lot of "Campari whatevers"… "make me a Campari-whatever," or "make me a whiskey-anything." And those are always really good moments. [Having] no list also gives us an opportunity to talk a little further with people who are not familiar with classics, we can talk to them about that and teach them. 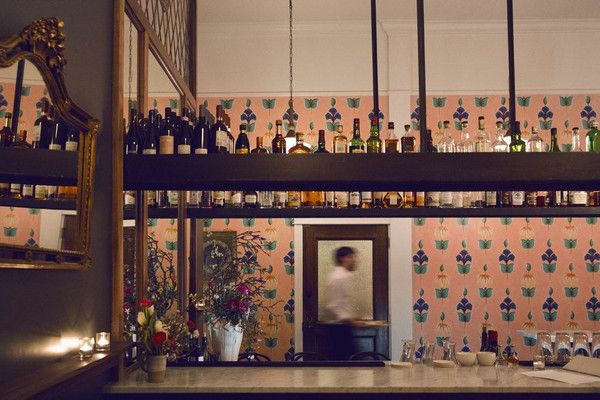 What questions do you ask in order to get someone to their perfect cocktail?
We usually try to figure out if there is something that they're used to drinking or if they're really craving something in particular. And a lot of times, they actually do know what they want. [Laughs] And at that point we actually try to encourage them to go with what they really are feeling. If they don't know what they want, then we tend to ask some questions on what they normally like to drink, or we might talk about some flavors, or let them pick a spirit that they're interested in from the collection, and build something off of that. We put a lot of time in making sure that — like a whiskey sour for instance —is something we make really well. And we do the best job representing that whiskey sour as we possibly can.

Do you think guests order more or fewer cocktails due to the no-list format?
It's still very cocktail driven in here. We sell a ton of the classics, which is perfect for us. But we do get to sell a variety of spirits that I don't think a lot of other bars do. Lately, we've been using tons of Martinique rum. And there are spirits that we didn't even intend to use when we had the initial conversations. Those are things that just happened through talking to people. We have the opportunity to present people with those in an easier way with dialogue, than we would if we were set on a list. It becomes a much more personal experience.

We've also found that we are making drinks that we didn't know we'd normally be making. One of our regulars orders a Midwest Manhattan, which is basically a Manhattan — he prefers it fairly dry — served with an olive. As a collective group we're all into a lot Brandies, and European spirits, and Eau de vies and grappas, and things like that. And we've gotten to share those things with our guests.

Any crazy requests so far?
Bartenders never tell. And if they have, shame on them. [Laughs] It really hasn't been that bizarre. No one has really come up with anything that weird, it's been pretty traditional. No drop shots — no one has even asked. No one has been trying to buck us. We try and mess around with the format a little, to make it fun for people, but nothing too bizarre, yet.
· Angel Face [Official site]
· All Previous Angel Face Coverage [Eater PDX]