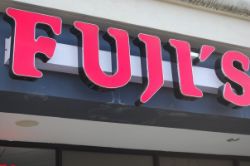 After earning his MBA in just 12 months, A.J. Kemp, a native Oregonian, was on the fast track towards a high-powered investment banker position in New York City when, in 2003, his late father Jack Kemp called to say he just purchased a 50-acre property in Sherwood, Oregon. The land happened to have a vineyard on it, so Kemp moved back to Oregon and began farming grapes. In 2006, Kemp, his mother Willie, and his father Jack co-founded Hawks View Cellars, and Kemp currently manages all day-to-day operations at Hawks View including the tasting room, vineyard, and cellar. Just minutes away from the vineyard you might find him at his favorite sushi joint, Fuji's in Sherwood.

Tucked stealthily in a strip mall at the gateway to Oregon's wine country is Fuij's in Sherwood (there are also locations in Beaverton and Vancouver, Wash.). What sets this hidden gem apart is the superb quality of their locally sourced fish and chill atmosphere. Fuji's also has a number of family-friendly grill stations manned by their master chefs putting on a culinary show as they entertain the patrons with juggling and other theatrics. The TNT Roll (covered in Sriracha) is a must, and my personal favorite is their Mai Tai roll that isn't listed on the menu… trust me on this one and order it by name. Complete your experience with a Kirin Ichiban and always ask for extra ginger!