Share All sharing options for: The Meatiest Options at SE 82nd's Cartlandia Pod

With many popular food pods announcing closures by the end of summer, namely Cartopia and North Station — Cartlandia on 82nd Avenue isn't going anywhere. Located just off the Springwater Corridor, the pod is both bike- and family-friendly hosting almost 30 diverse carts and trucks. Property owner Roger Goldingay constructed the lot in 2011 specifically to cater to a large pod, and with the recent opening of its on-site (brick-and-mortar) bar, "we are doing better than we ever believed we could be," he says. Eater checked out the pod specifically to feed our carnivorous curiosity and order the meatiest street meat. The results? A ton of meaty options — so many, in fact, that one afternoon lunch just broke the surface. 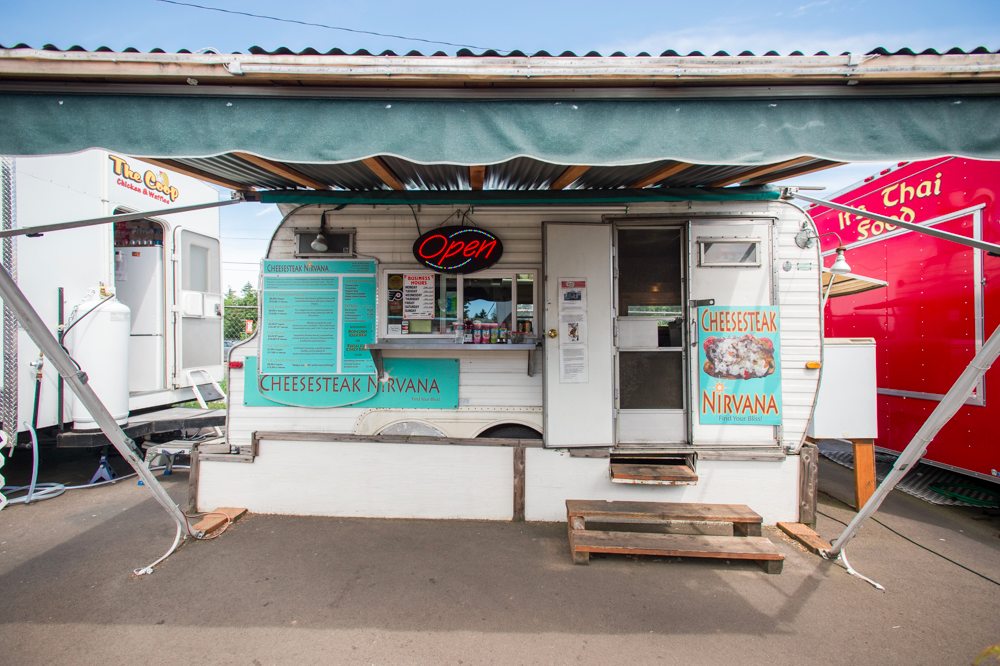 Cheesesteak Nirvana
If you're from the East Coast, there's a slight chance that you know what an Amoroso bun is, and this is where you can get it in PDX. Owner Ben Goodrich has them shipped from Philly, and he's been serving them stuffed and hot for over three years now. Goodrich says, "My dad was from Philly and I could never find one as good as he made. So I decided to do it myself."
Eater Ate: "The Fundamentalist," with thin sliced grilled sirloin, caramelized onions, and cheese whiz (of course.)

Kesone Asian Fusion
Kesone Southasaran has been serving Thai and Lao fusion for more than a decade in Portland. And she's developed a devoted following for her creative take on traditional dishes. She opted to close her NE Portland bistro and instead open her little red cart at Cartlandia in October of 2012. And it may be a small kitchen, but Southasaran is pumping out big flavors and a menu that boasts nearly 30 items.
Eater Ate: Larb (a Laotian minced meat salad) with spicy ground beef, cucumbers, sticky rice, and romaine lettuce spears.

Brother Express
Property owner Roger Goldingay essentially recruited Jose Velazquez from a location on Stark to move his truck to Cartlandia in November of 2011. Brothers Express has since become an anchor at the pod, with Goldingay noting, "There are people lined up all day." Velazquez offers a large menu at very affordable prices (certain tacos are just 99 cents), huge breakfast burritos, and as you can tell by our choices, he's also a proponent for cooking with the whole animal.
Eater Ate: A round of tacos: al pastor (marinated pork), Chorizo, Tripa (cow stomach), Buche (pig stomach), and Lengua (tongue).

Da Fat Boyz
Pastor John Bagorio started cooking barbecue about 12 years ago to raise money for mission groups. People were so impressed, they convinced him to make it a professional gig. He started doing competitions around the country and eventually opened Da Fat Boyz at Cartlandia in October of 2013, where Bagorio showcases a mix of Texas, Midwest, and Carolina barbecue.
Eater Ate: Dry-rubbed pork ribs with coleslaw and baked beans.

Sausage Fest
Shalene Gibson opened her bright red cart at Cartlandia in early March. She grills up sausages of all kinds and serves 'em on a stick. Gibson says the German smoked and chicken tandoori with grilled peppers and onions are two of the most popular, but she also offers more unusual combinations on a weekly basis. To wit:
Eater Ate: "Jackalope" sausage — a blend of rabbit and antelope meats — with spicy mustard and grilled peppers and onions.

Smokin' Rome's
Of course there is more than one barbecue cart at Cartlandia, and of course, we ate at them both. Owner Jerome Stevens brings together three generations of Texas-style barbecue with his cart. Tucked in the back corner at Cartlandia, Stevens tends his smoker and serves up pulled pork, beef brisket, and sausages with all of the traditional sides.
Eater Ate: Beef brisket with the tangy sauce and coleslaw.
· All Previous Cartlandia Coverage [Eater PDX]
· All Previous Five Days of Meat Coverage [Eater PDX]