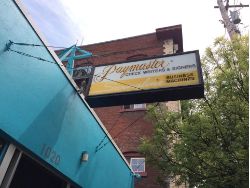 A New Jersey native, chef Wesley Johnson of Café Castagna was greatly influenced by his family. He has fond memories of his mother's Sunday night family dinners, during which she would often stop to jot down notes in a family recipe book. Each week Johnson's grandfather would hand-grind sausage in the kitchen, a dish deeply rooted in his family's Polish heritage. Johnson's passion for good food led him to a path of professional cooking. He got his start working with Michael Solomonov, as part of the opening team of Zahav in Philadelphia. After mastering the art of laffa at Zahav, Johnson transitioned to Le Bec-Fin, Philadelphia's most venerable white tablecloth French restaurant.

In 2011, Johnson relocated to Oregon, landing a position in the kitchen of Nate Tilden's Spirit of 77. He also worked briefly with Chef Justin Woodward in the kitchen at Castagna. Now he's heading up the kitchen in the Café, where he looks forward to continuing to explore the marriage of Northwest ingredients and Mediterranean cuisine. That is, when he isn't chowing down griddle burgers at the Paymaster Lounge: According to Johnson, they're the "best in town."

So I really love griddle burger and this is my favorite. I find my self at Paymaster Lounge about once a week. I'm there for the double cheddar burger with fries. My girlfriend works at Olympic Provisions Northwest, which is in the same neighborhood, so we frequently end up there at the end of our shifts. Turns out the cheeseburger is amazing. It's a griddle-style burger on a soft white bun with the usual onion, lettuce, and tomato, but it melts in your mouth in the best way. While waiting for friends to arrive I regularly crush a double and order a second so they think I just had one. The fries are solid and come with a Serrano-chili aioli and a buttermilk dressing, both made in-house and super tasty. They have a huge covered and heated outdoor patio with a pool table, and a vending machine full of fun things. But for me it is all about the burger, I love it. Double burger with cheddar at Paymaster Lounge, best in town.