Charcuterie at Olympic Provisions Is All Pork All the Time

Share All sharing options for: Charcuterie at Olympic Provisions Is All Pork All the Time

At Olympic Provisions's 30,000-square-foot production facility in the Central Eastside Industrial district, head salumist Elias Cairo oversees a meat operation that now creates more than 40 products — from pork shoulder rillette to sweetheart hams — to ship across the United States. At both OP's Southeast and Northwest Portland restaurants, diners can purchase these charcuterie items by the ounce, or as part of regionally-themed boards (Spanish, French, Italian), and Cairo, a meat-tasting expert of sorts, recommends a strategy similar to wine: start with the lightest varieties first, then work up to smokier and spicier meats. "I like to taste the most mild in spice first to see if I can tell the quality in pork that they are using," he says. "Anyone can make over-spiced meat and hide a lot of mistakes. I love tasting when someone can make meat with restraint."

Cairo's "chef's choice" charcuterie board is stacked with nine porky preparations. "When we make a meat board, we like to show how many different types of technique that we are able to do," Cairo says. "We ferment, dry-cure, smoke, emulsify, confit, poach." The result offers three of the brand's dozen salami styles, plus a couple cold cuts, creamy pâtés, and a cooked sausage, all crafted from 100 percent lean pork (with plenty of its own fat added back, of course). It's designed with the ideal European dining experience in mind: "Don't get me going on the amount of good drink that is meant to be consumed," Cairo says, "while eating the board." 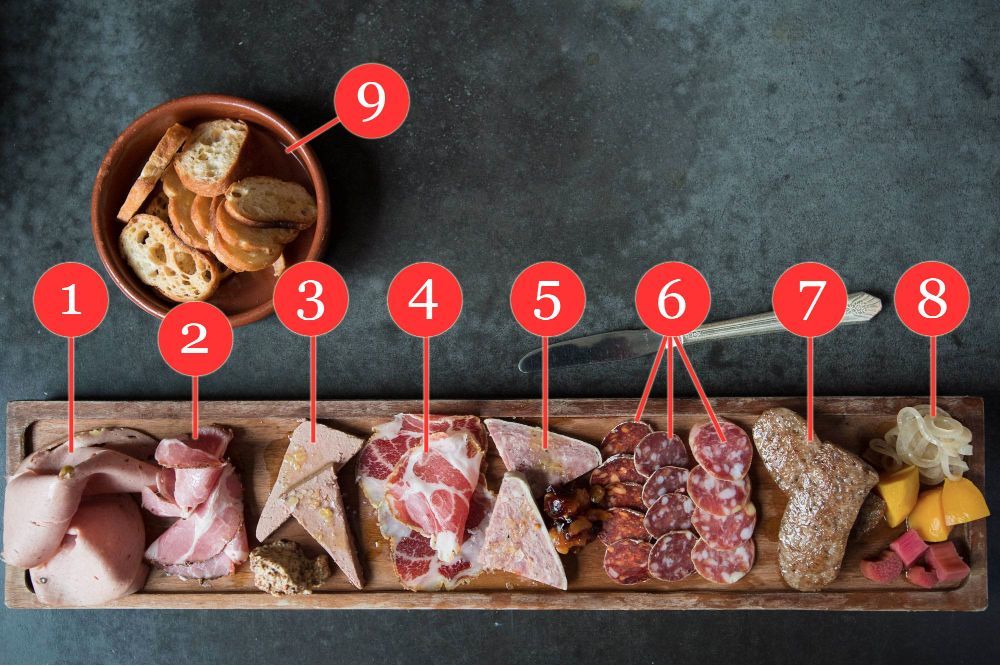 1. Mortadella: Cairo shaves a few slices of Olympic Provisions' Italian bologna to start the plate. In traditional style, the ground pork is studded with "specks" of fat, sweet spices (nutmeg, cinnamon), plus peppercorn, pistachios, and garlic.

2. Capicola: Made from the pork neck and shoulder, OP's capicola is cured for 10 days before being rubbed with pepper, chili flake, fennel seed, coriander, and anise, then roasted. According to Cairo, "it ends up being a much more moist product" compared to its dry-cured cousin, coppa, which appears further down the plate.

4. Coppa: Like capicola, OP's coppa is also made from the pork shoulder muscle, but is cured and slowly dried to pull all the moisture out of the meat. "I love them both on a meat board to show folks how a different technique can change the whole product," Cairo says, pointing out the wildly different flavor profiles that can be extracted from the same cut.

5. Green peppercorn terrine: A pâté made from pancetta, it's nestled alongside a dollop of raisin and currant chutney.

6. Salamis: A trio of OP's bread-and-butter product shows off one example from each major salami-making region: From left to right, Cairo slices up tastes of his Spanish chorizo rioja, Italian salami nola, and French saucisson d'Arles. "I love that we make meat from many European influences," says Cairo, who was classically trained in meat-making in the Alps. "I like to show that the French love the flavor of hog, so I like to start with the Arles — it's just pork and salt." Meanwhile, the Italian Nola features all-spice and pepper flakes ("Italians like a little bit of heat and unique spice combinations"), while the dry chorizo rioja features sweet and smoked paprika, garlic, and oregano. "It's really nice to be able to have folks try a dry chorizo with really good paprika and oregano that has a good amount of depth in flavor," Cairo says. "Some folks think that chorizo is just a greasy sausage full of paprika. It should be so much more than that."

7. Italian sausage: A somewhat unexpected addition to the board of cured meats, a seared Italian sausage features pork shoulder meat with garlic, fennel, chile, oregano, and coriander. "A hard, dry-cured meat next to a delicate pâté and then a nice bite of warm sausage — moist with a bit of smoke — is fun," Cairo says. "And of course you need acid, so the pickles and a bright salad is also a must."

8. Pickles: To that effect, Cairo's current board features onion, beet, and rhubarb pickles, though the selection varies (OP's pantry also features picked cauliflower, zucchini, and celery, depending on the season).