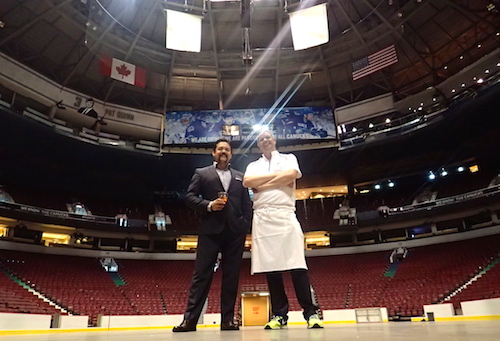 VANCOUVER— Big stadium news from Rogers Arena, where ace bartender Jay Jones has taken up the reins as the Canucks' new director of all things drinkable: what does this mean? Well, for a start, Negronis and live hockey, 14 different wines by the glass and — we're promised — craft beer. Plus a hot new chef from Toronto who's bringing in an in-house butchery program. Hockey just got EVEN BETTER. [EVAN]

SEATTLE— Excitement has been building over the past several months about Trove, the new 4,000-square-foot project that's split into four moving parts: A Korean barbecue with eight built-in grill tables; a front noodle counter; an ice cream parfait station and window; and a bar serving cocktails, including a few that feature house-made beer syrup. Rachel Yang and Seif Chirchi's (Joule, Revel) latest concept includes some pretty amazing design details, like a huge lit up diorama of Mt. Rainier erupting in the bar and hand-drawn wallpaper in the main dining room. Eater Seattle has details. [ESEA]

SEATTLE— Pioneer Square's Pizzeria Gabbiano joins the Seattle Heatmap this month. The instantly popular lunch spot launched in August from Il Corvo's Mike Easton, serving pie that's cut into slices with kitchen shears and sold by the kilo. Gabbiano is only open during the workweek, butcheck out the map for more restaurants to try if you're traveling to Seattle this weekend. [ESEA]

VANCOUVER— It's time to update the Vancouver heatmap and this month it's all about old favourites becoming new again as both Chambar and Cafe Medina move into fresh digs. Plus the city has gone nuts for Bella Gelateria's new Yaletown outpost and its booze-soaked 'gelatinis'. Ramen recommendations of a 'fast, convenient and very satisfying' spot from Wildebeest chef Wes Young this week in Dining Confidential. [EVAN]

#TEAMTINA— Sad news from one of the city's most beloved chefs and mentors, Tina Fineza, who has been diagnosed with aggressive stage three bilateral breast cancer. A fundraising site has been set up to help over the next year as Tina takes leave from her company Service Excellence to focus on recovery. [EVAN]